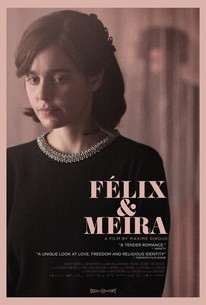 FÉLIX AND MEIRA is a calling card for its young director, Maxime Giroux a story of an unconventional romance between two people living vastly different realities mere blocks away from one another. Each lost in their everyday lives, Meira (Hadas Yaron), a Hasidic Jewish wife and mother and Félix (Martin Dubreuil), a Secular loner mourning the recent death of his estranged father, unexpectedly meet in a local bakery in Montreal's Mile End district. What starts as an innocent friendship becomes more serious as the two wayward strangers find comfort in one another. As Felix opens Meira's eyes to the world outside of her tight-knit Orthodox community, her desire for change becomes harder for her to ignore, ultimately forcing her to choose: remain in the life that she knows or give it all up to be with Félix. Giroux's film is a poignant and touching tale of self-discovery set against the backdrops of Montreal, Brooklyn, and Venice, Italy.

Delicate, warm and worried, "Felix and Meira" is a coming-of-age film about two grown people stunted by social circumstance.

This is the sort of movie whose warmth toward its characters is contagious.

When is an image held for too long? At what point does a shot's duration outlast its emotional information? As ardent and earnest as it is, "Felix and Meira" is a test case.

The movie approaches this mutual attraction tentatively, much as the two characters do. And that's the problem with this well-meaning but ultimately hollow film romance: You don't see it; you don't get it.

There's a subtext to this love story that seems to say we're all islands, in one way or another.

Director Maxime Giroux gets good performances from leads Martin Dubreuil and Hadas Yaron...But the romantic mood is asked to cover for too much left unsaid, unasked, and undone.

A quiet and silent sort of romance movie, one where looks to convey emotions where words are not allowed.

The story takes a path that is not surprising. What makes the film engaging is the route it takes to get there.

Plot complications lessen the movie, but intermittently it is genuinely moving.

There's an inevitability to the proceedings which turns out to be not so inevitable after all, particularly in the final act, when the seemingly one-note Shulem is given unexpected depth.

You can't get better than Israeli actress Yaron, who already triumphed as a married Hasidim in the heralded Israeli film, Fill the Void.

Religion both restricts and gives purpose to the people in Félix & Meira, an acutely observed and perfectly played slice of human drama set mostly in Montreal.

It must be a sign that a film is not working when you wish to know more about a two-dimensional supporting character (Meira's husband) than about the two main ones, who are as dull as the artificial dialogue and the tedious dynamics between them - and the film only goes into high gear with thirty minutes left to end.

As Felix(Martin Dubreuil) and Meira(Hadas Yaron) meet and bond over a shared interest in music and art, this movie asks in sensitive and understated fashion in a variety of languages and settings whether these two misfits can fit in anywhere...and whether that is at all important. So, "Felix and Meira" is not meant as a criticism per se of Orthodox Judaism that Meira belongs to. But it does point out that it and Meira's husband Shulem(Luzer Twersky) are ill-equipped to deal with the postpartum depression she is probably suffering from. Meanwhile, Felix has severely mixed feelings from visiting his domineering father on his deathbed.