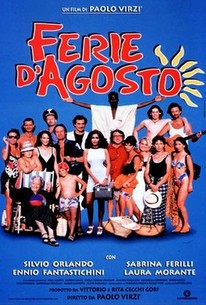 Two disparate Italian families battle it out on a remote island during summer vacation in this barbed social comedy that sharply comments on the yawning chasm created by ideological and political differences between liberal-but-narrow-minded intellectual elitists and ultra-conservative, ignorant masses. The story's battleground is set upon the island of Ventotene and on either side are adjacent cabins. In one stays the intellectually arrogant Sandro Molino. He brings with him his girl friend Cecilia, her baby, and her father. Cecilia is constantly insecure about her relationship with Sandro while papa Mauro, a failed thespian, fights his ever-encroaching depression. The Molino camp and its many followers spend their days playing music, sipping wine, smoking hashish, grooving on nature and engaging in endless conversations until the prominent Roman gun merchant Ruggero Mazzalupi and his boisterous family show up and spoil everything. The riotous Mazzalupis are as vulgar as the Molinos are tragically hip. The real conflict begins when Sandro threatens to turn Ruggero in for abusing a Senegalese servant. Chaos between the clans erupt, but amidst the cafuffle, two teens still manage to fall in love. ~ Sandra Brennan, Rovi

Antonella Ponziani
as Francesca
View All

There are no critic reviews yet for Ferie d'agosto (August Vacation). Keep checking Rotten Tomatoes for updates!

There are no featured reviews for Ferie d'agosto (August Vacation) at this time.