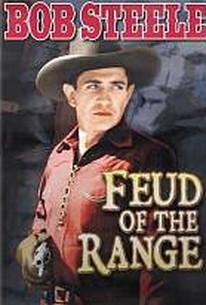 Feud of the Range Photos

Feud of the Range was the first of eight Bob Steele westerns produced by Metropolitan Pictures, an outgrowth (though not much of an improvement) of povery-row Reliable Productions. Hero Bob Gray (Steele) takes on a gang of frontier terrorists who've been looting, burning and killing with reckless abandon. Unfortunately, either Gray is stupid or the villains are equipped with radar, since the baddies manage to elude our hero at every turn. Not surprisingly, the reign of terror is tied in with the impending arrival of the railroad, from which chief heavy Baston (Jack Ingram) hopes to profit. Though ploddingly familiar, there are a few surprises in Feud of the Range, notably the symbolic montage at the beginning of the film (replete with flashes of lightning) and the casting of perennial villain Rychard Cramer as Bob Steele's kindly father.

Carl Mathews
as Henchman
View All

Critic Reviews for Feud of the Range

There are no critic reviews yet for Feud of the Range. Keep checking Rotten Tomatoes for updates!

There are no featured reviews for Feud of the Range at this time.

Feud of the Range Quotes