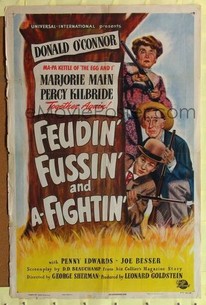 Feudin', Fussin' and A-Fightin' starts off on a tense note as a struggling man is led through the streets of a western town, presumably headed for his own execution. Within a few minutes, however, we discover that the "victim" is a reluctant trainee for an upcoming foot-race between the feuding towns of Rim Rock and Big Bend. With an appalling lack of local talent in Rim Rock, it looks as though Big Bend is once again going to win the annual event. Into this melancholy situation walks travelling salesman Wilbur McMurtry (Donald O'Connor). When he proves to be very light on his feet, Wilbur is kidnapped by the townsfolk and ordered to run on behalf of Rim Rock -- with the understanding that if he loses, he really loses. Musical highlights include Donald O'Connor's duet with Penny Edwards (a western ingenue who seldom got a chance to demonstrate her dancing skills), a vocal contribution by the Sportsman Quartet of Jack Benny Show fame, and the byplay between Rimrock mayor Maribel Mathews and stableman Billy Caswell, played by Ma and Pa Kettle co-stars Marjorie Main and Percy Kilbride.

I. Stanford Jolley
as Guard

Harry Brown
as Man in Tree

Charles B. Middleton
as Citizen

Monte Montague
as Men in Cafe

There are no critic reviews yet for Feudin', Fussin' and A-Fightin'. Keep checking Rotten Tomatoes for updates!

There are no featured reviews for Feudin', Fussin' and A-Fightin' at this time.