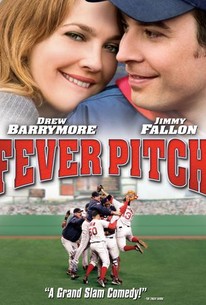 Critics Consensus: While not a home run, Fever Pitch has enough charm and on-screen chemistry between the two leads to make it a solid hit.

Critics Consensus: While not a home run, Fever Pitch has enough charm and on-screen chemistry between the two leads to make it a solid hit.

Critic Consensus: While not a home run, Fever Pitch has enough charm and on-screen chemistry between the two leads to make it a solid hit.

Nick Hornby's acclaimed memoir about one man's struggle to balance his love of a woman and his love for soccer was the basis of a well-reviewed British film in 1997, and now gets a Americanized rewrite with this picture, in which the game is changed from soccer to baseball. Ben (Jimmy Fallon) is a high-school teacher who meets Lindsay (Drew Barrymore), who has a successful career in business. Ben and Lindsay don't appear to have much in common on the surface, but they hit it off and are soon involved in a serious romance. But when spring rolls around, Lindsay becomes aware of the true love of Ben's life -- the Boston Red Sox. Despite the team's lamentable record, Ben has been a fiercely loyal Red Sox fan since childhood, and Lindsay finds it hard to compete with his passion for baseball, while Ben is forced to choose between the obsessions of his youth and the enthusiasms of a responsible adult. Fever Pitch was shot in part in Boston during the 2004 baseball season, which to the surprise of the filmmakers saw the Red Sox winning baseball's world series for the first time since 1918.

James B. Sikking
as Doug Meeks

Gina Clayton
as Lady At Other Table

Bart Bedford
as Man At Other Table

Jason Varitek
as Himself

Johnny Damon
as Himself

Trot Nixon
as Himself

Kevin Millar
as Himself

Jim Rice
as Himself

Dennis Eckersley
as Himself

Peter Gammons
as Himself

Don Orsillo
as Himself

Harold Reynolds
as Himself

Jordan Leandre
as Himself
View All

I think it's very ordinary.

...tries to deal with the messy process of nurturing a proper adult relationship rather than simply shoehorning two lovers into a predictable set of catastrophic circumstances until they finally succumb to one another.

Stripped of almost all the brothers' usual crudeness, Fever Pitch proves what we've suspected all along: That beneath the gross-out gags and freak-show humor, Peter and Bobby Farrelly are just a couple of lovable romantics.

The film turns out to be a substantial pleasure as the spirit of the Sox shines through.

It's slickly done, pleasantly watchable, but despite Barrymore's ever-charming earnestness, not quite a home run.

To put it in baseball terms, Fever Pitch swings for the fences, only to come up well short of the warning track.

Fallon and Barrymore make for a likable and funny couple, even if this reasonably amusing film doesn't quite hit a home run.

Fever Pitch, the newest film from the Farrelly Brothers isn't packing much heat, but the humility will kill you.

Nick Hornby's novels have produced two terrific examples of the genre: High Fidelity and About A Boy. Unfortunately, this latest adaptation is strictly a minor league affair.

A delightful romantic comedy without the excesses we've come to expect of the Farrellys.

Margaret Pomeranz
At the Movies (Australia)
View All Critic Reviews (196)

Smart, charming and filled with laughter. Fever Pitch hits it out the park with the outstanding on-screen chemistry of Barrymore and Fallon. With the mixture of romance and baseball, the film delivers with spark and flare. 5/5

I'm not a baseball fan but this movie was just great. Jimmy Fallon & Drew Barrymore had perfect chemistry and the part of Al, the sponge salesman, who was the guy that introduced Ben (Fallon), to baseball was great as well. An adorable, sporty, romcom that I very much enjoyed! (:

This is cute fun lovable comedy. I personally thought Fallon and Barrymore had a really good connection and they made this movie work. Im a sucker for romance though.