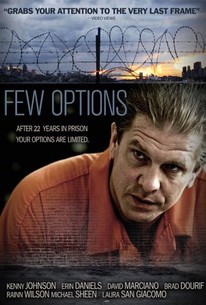 Released from prison after serving 22 years for drug smuggling, repentant ex-con Frank Connor (Kenny Johnson) is forced back into a life of crime by his sinister former boss (Brad Dourif) - the powerful owner of a popular inner-city club. Back when Frank got busted, his refusal to talk earned him a stiff prison sentence. More than two decades later, Frank is back on the street, and determined to turn his life around. At first things are looking good; Frank's old partners in crime manage to find him a legitimate job, and he even meets a girl who isn't put off by his shady past. But when Frank's former boss gives him an offer he can't refuse, any thoughts of starting a new life quickly disappear. ~ Jason Buchanan, Rovi

There are no critic reviews yet for Few Options. Keep checking Rotten Tomatoes for updates!

There are no featured reviews for Few Options at this time.