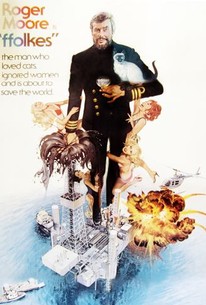 A special commando unit is formed to take down terrorists who threaten to explode two oil rigs if their demands are not met.

Angela Thorne
as Woman on Train

Martin Matthews
as Man on Train

William Abney
as Gail
View All

ffolkes is an admirably crisp, incisive counter-terrorist thriller, the most proficient and entertaining movie of its kind since Richard Lester's Juggernaut.

Moore is amusing in a change-of-pace role.

Such eccentric coating on basically humdrum material is symptomatic of the film as a whole.

FFOLKES appears in the middle of Moore's run of Bond films, and you have to wonder how strongly he was attracted to the part just to escape that image

So this is one of those movies that has numerous alternative titles for no real apparent reason. The official British title, in my opinion, is easily the best and rather self explanatory. The title of 'ffolkes' is actually the name of the protagonist played by Roger Moore. ffolkes is an old English name/title that belongs to the Baronetage of Great Britain and yes it is spelt with a lowercase 'f'. Naturally the Americans needed a more action packed title to sell it, ugh! The plot: Its really quite simple. Ex-military officer Rufus Excalibur ffolkes is employed to create a contingency plan should any British oil rigs come under threat. Low and behold, months later, a team of crack terrorists take control of an oil rig in the North Sea. They demand a 25 million ransom or they will destroy the rig. Of course this is just what ffolkes was counting on, because he created that contingency plan remember. So its up to him to use said contingency plan and save the day. So firstly, yes that is the characters real name. Rufus Excalibur ffolkes, just in case you didn't quite get the fact that this chap is full on British. We're talking full on [i]Rule, Britannia![/i] Union Jack waving, tea sipping British. And who better to play this type of character than Roger 'Bond Templar' Moore. The amusing thing is Moore took this gig on with the intention of getting away from being typecast as Bond-esque characters. Yet what we have here is merely Bond all over again, but grumpy. In fact the character of ffolkes is more in line with Daniel Craig's Bond if anything. He's rude, arrogant, merciless, and a misogynist (unapologetically so). Oh and he's also a big cat lover. They basically try to make him out to be the typical bachelor, as far from Moore's playboy image as possible. Alas that fails because it still screams of Bond. Backing up ffolkes during this dangerous escapade is Admiral Brinsden played by James Mason. Not really sure why they allow an aging officer to go along with ffolkes plan to take down the terrorists. I think the bad guys wanted leverage against the British government, a juicy hostage. But anyway, if you wanted more evidence of how British this movie was, you don't get much more British than good old James Mason. Stiff upper lip and all that old chap. The evil terrorist villains are led by Anthony Perkins (Lou Kramer) who looks and acts exactly the same as he always does, and Michael Parks (Shulman) as the sidekick with small thick Lennon specs. The character of Kramer is your bog standard baddie really. He's very aggressive, shouts a lot, twitchy, trigger-happy, clearly loses the plot when things get a bit awkward etc...Where as his sidekick Shulman is the typically quiet, calmer madman who looks a bit odd down to his thick specs. The movie clearly plays it straight and the results are amusing to say the least. We find ffolkes training his men, his elite special unit, on what looks to be a very large climbing frame. It literally looks like he's pinched a builders scaffolding set up, because its literally scaffolding. His men are climbing all over it trying to reach the top within a certain time limit...or something. It doesn't look like a specialised elite fighting unit that's for sure, especially with ffolkes dressed like a character from the [i]Harry Potter[/i] universe, or [i]Where's Wally[/i]. What really made me laugh is how the British government chose ffolkes and his team. They watch a crappy VHS video recording of his team taking out local Judo club members who were hired to guard his scaffolding (seriously). The movie does feature solid production values I can't deny. Shot on-board real ships and using real dockyards (in Ireland I believe), all of which adds to the authenticity. There are some good underwater sequences, good sets, and reasonable model shots. Its also looks suitable chilly at all times which again adds to the whole look and feel. Overall it definitely looks like the action is happening out in the North Sea and it definitely looks uncomfortable and moist. As you might expect the action is somewhat lacking in thrills. There isn't really any fisticuffs to speak of, hardly any gun porn, no breathtaking stunts etc...Its all pretty low-key really, dare I say very gentlemanly in execution, to tie in with the main protagonist perhaps. The most brutal things you'll see are a few hits with a harpoon gun. Overall this is definitely a middle of the road affair that you'd typically see on TV during a lazy Bank Holiday afternoon (probably on ITV). Yes it is indeed almost a precursor to the legendary 1988 action epic 'Die Hard', the similarities are evident. In fact its very much in line with the many 'Die Hard' clones that came later, 'Under Siege' for example. One of the best things about this movie is obviously Roger Moore and his quirks. But its the misogyny from his character that actually makes this more enjoyable honesty. Knowing how controversial it would be now, the sheer outrage that would follow (across [i]Twitter[/i]). It does show how more accepting we were back in the day frankly, that you could actually do this without worrying about outrage. Knowing it was just for the movie, just a bit of dark humour for a dark horse of a character. It shows how much we have regressed as a society in my view. I love how the finale kinda expresses this point. After the mission is complete ffolkes is congratulated by the Prime Minster and top ranking officials. But he doesn't receive medals or money or whatever (stuff and nonsense my dear boy). Instead he is awarded with three fluffy kittens, because he's a cat loving bachelor that hates women, remember.

The popular title for this movie is Ffolkes, which confused me for years about what kind of movie it might be, but it's a thriller in which Roger Moore plays "Ffolkes" a guy who trains himself and his friends to be able to take down enemies and/or fight for good causes. Perkins plays the leader of a group of terrorists who want to blow up oil rigs in the sea. Both of them give good performances even if the story isn't that great. Overall, it's pretty good, and I kinda enjoyed it.

Roger Moore was without a doubt the prissiest actor to ever play James Bond. Here he plays Rufus Excalibur Ffolkes, eccentric leader of an elit anti-terrorist group. A man that hates women, and enjoying doing needlepoint tapestries of cats. His team is called in to service when a group of terrorists holds a trio of offshore oil rigs for ransom against the British government. The group is led by Norman Bates himself, Anthony Perkins. So Ffolkes and his team are called in to thwart the terrorist plot before they can send all three rigs to the bottom of the ocean. This movie is a real guilty pleasure, but it's also extremely well made. The visual effect for its time are outstanding, in its rendering of the giant offshore oil rigs. The acting is uniformally sound, even with Moore being his quirky, and somewhat girly self. More of a tension drama than an action movie, the film does follow a somewhat formulatic plot that would be repeated ad nauseum in the wake of Die Hard. The lone man against the terrorists, that kind of thing. Roger Moore is not a tough guy, and in all honesty, he never tries to make Ffolkes a tough guy. But he's smarter than everybody else in the room, and he takes great pride in showing that he knows that. A very heavily slanted British movie, some of the things are lost on a Yank. Like the terrorists demands for "One thousand million dollars." Um...wouldn't that be one BILLION dollars? Oh well. It's a very entertaining action thriller starring one of the most famous wimps in action movie history. But that's the great thing about the 80's...anybody could save the world.

Of course, no movie with Roger Moore is a classic, but this tongue-in-cheek spy thriller with the actor playing against his James Bond stereotype provides some good, campy entertainment.