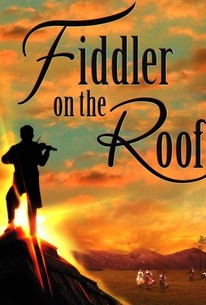 Critics Consensus: A bird may love a fish -- and musical fans will love this adaptation of Fiddler on the Roof, even if it isn't quite as transcendent as the long-running stage version.

Critics Consensus: A bird may love a fish -- and musical fans will love this adaptation of Fiddler on the Roof, even if it isn't quite as transcendent as the long-running stage version.

Critic Consensus: A bird may love a fish -- and musical fans will love this adaptation of Fiddler on the Roof, even if it isn't quite as transcendent as the long-running stage version.

Fiddler on the Roof Photos

Norman Jewison's adaptation of the long-running Broadway musical is set in the Ukranian ghetto village of Anatevka (the film was actually lensed in Yugoslavia). Israeli actor Topol repeats his London stage role as Tevye the milkman, whose equilibrium is constantly being challenged by his poverty, the prejudicial attitudes of non-Jews, and the romantic entanglements of his five daughters. Whenever the weight of the world becomes too much for him, Tevye carries on lengthy conversations with God, who does not answer but is at least more willing to listen than the milkman's remonstrative wife Golde. After arranging a marriage between his oldest daughter Tzeitel and wealthy butcher Lazar Wolf, Tevye is forced to do some quick rearranging when the girl falls in love with poor tailor Motel Kamzoil. Fancying himself more broad-minded than his gentile oppressors, Tevye cannot accept the notion that his other daughter Chava would want to marry Fyedka, a non-Jew. And after shouting the praises of "tradition," Tevye must change his tune-and his entire life-when he and his neighbors are forced out of Anatevka by the Czar's minions. Topol's co-stars include Norma Crane as Golde, Yiddish theater legend Molly Picon as Yente the matchmaker, and Leonard Frey as Motel.

A. Haverstock
as Village Band Member

Critic Reviews for Fiddler on the Roof

There are some contrived and artificial moments in Fiddler, but it becomes more convincing, naturalistic, and involving as it goes on, and finally builds to a powerful climax.

The qualities that have kept the Broadway Fiddler running these seven years are in scant supply onscreen.

Earthbound but not bad.

Sentimental in a theatrical way, romantic in the oldfashioned way, nostalgic of immigration days, affirmative of human decency, loyalty, bravery and folk humor.

Very hard to take with the film sitting up and practically slobbering in its eagerness to prove how loveable it is.

They want to show us everything, to give us our money's worth. In so doing, they've not just opened up the play, they've let most of the life out of it.

In its magnificent sound and picture ... and its broad, showy performances, Fiddler is very much a traditional Hollywood musical.

Nearly 50 years following its release, Fiddler on the Roof remains a beautiful masterpiece.

All I can say is that a very good stage show has, for me, been transformed into an equally good work of cinema.

There's a vibrant nature to the acting in this film that warms the heart and makes it feel comfortable, even when things aren't going so great for the characters.

What could have been a brilliant film experience, expanding on the stage version as only film can, ends up instead as a series of wonderful bits and pieces.

The choreography is clumsy, the acting caricatured, and the songs themselves painfully overblown.

Audience Reviews for Fiddler on the Roof

Based on the Broad way musical of the same name, this is the epic story of finding the balance between tradition and progress. It's set in the Orthodox Jewish section of the tiny Russian ghetto town called Anatevka in the early 1900s. This film is a bit overlong, and a little boring here and there, but aside from that, it is wonderful. It works better as a stage production, but it's still fine as a film. For the longest time, everything I knew about Jewish culture came from this film. It's portrayal of the Jewish people and culture (specifically Russian Jews) is quite accurate by many accounts, but a little laughable and stereotypical if taken out of context. I really like this movie, and it is one of my favorite musicals, but this isn't something I can bring myself to watch very often. It's a good story, but man, it's so depressing. I guess in the long run the story has a happier ending, but if you discount that, it's got a very bittersweet conclusion that seems to further reinforce the idea that Jews have such a miserable and downbeat history. The acting is mostly pretty great. Some are better than others, though. It was controversial to cast him, but Topol makes for a great Tevye. It would have been awesome had they gotten Zero Mostel to reprise the role though. The music is basically the star of the show, and it's essentially flawless..unless you don't like musicals. If that's the case though, then you have no business watching this. I also really love the sets, costumes, and the camera work. The attention to detail is fantastic, and things just look gorgeous. I'll conclude this review with an interesting story: my dad, good Roman Catholic man that he is, enjoys this story so much that he tried to persuade my mom to name me Lazar Wolf instead of the name I ended up with. That's awesome.

TRADITION!!!! TRADITION!!! And it doesn't get any better this this Oscar winning musical based on the Broadway show of the same name. Just to watch the great Topol in action is worth seeing. A Marvelous classic!!! One of the great movie musicals to ever grace the 1970's

I can't believe that it took me so long to see this deservedly acclaimed work by Norman Jewison about how life, as John Lennon said, is what happens while we were making other plans. Rousing and heartwarming with songs that do not offend but rather enhance the affair, as well as a look at life in a small Jewish village in Poland in the days before the revolution.

From the stage play that this film is based on, it is obvious that special care had to be taken place due to the strong and loyal fan base that is around this musical of hope and tradition. While watching this film, it is clear to see that Norman Jewison has taken special care in the production of the film. Visually, this film is beautiful seeing the country side and showing how it changes from a poor village to an overworked piece of land that is barely holding on. The story for this film is, sadly, one of the weakest parts. One thing that a lot of people hate is repetition. This is a film that repeats itself quite a bit. The basic formula is this: Daughter gets married, Father is upset, he gives in. Now, one of the redeeming parts of this overworked plot is that it continues to work every time. Acting wise, the only person worth mentioning is Topol as Tevye. He is seriously the only actor that develops his character, and actually makes it worthwhile and good. The rest of the cast is mostly (and sadly) one dimensional and I personally do not care for that. They introduce some good characters that I would have loved to see changed and developed, but the acting of Topol makes up for them all (thankfully). Now, the score is the complete highlight of this film and what makes this film worth the watch. There are few films that treat the subject of Judaism with respect and this is one of those films that does. The music, the set props, all capture the beauty of this heavily abused and neglected and tortured religion, and finally there is a film that gives dignity. So, overall, I say see this film if you love the original stage play, like the works of Norman Jewison, or like good musicals. But if you are expecting a deep, philosophical story line, then you are looking in the wrong place. Now, why am I recommending this story? Simple: It does what it does and what it does it does well.

Fiddler on the Roof Quotes