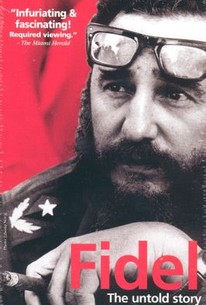 Fidel Castro is one of the world's best known and most recognizable political leaders, but he is also among the most mysterious. While Castro became a household name after overthrowing the rule of Fulgenico Batista and became the head of Cuba's new socialist government, little is known of his private life or the man behind the façade of his shaggy beard and omnipresent cigar. Fidel is a documentary by filmmaker Estela Bravo, who combines vintage newsreel footage with exclusive recent interviews which offer an insight into both Castro the leader, struggling to face the political and economic realities of the post-Soviet global environment, and Castro the man, as he tours his childhood home, goes swimming, and visits with his friends. Fidel also includes interviews with people who know or have met Castro, including Nelson Mandela, Muhammed Ali, Harry Belafonte, Alice Walker, Ted Turner, and Arthur Schlesinger, Jr.

Clark Ramsey
as Himself

Maj. Clark Ramsey
as Himself

Nelson Mandela
as Himself

Sydney Pollack
as Himself

Harry Belafonte
as Himself
View All

There are no critic reviews yet for Fidel. Keep checking Rotten Tomatoes for updates!

There are no featured audience reviews yet. Click the link below to see what others say about Fidel!