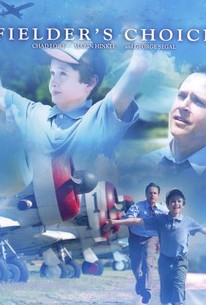 Ambitious young advertising man Phillip Fielder (Chad Lowe) has no time for relationships, and seems to have affection only for his creature comforts -- a source of great dismay for his erstwhile girlfriend, Holly Ford (Marin Hinkle). When his orphaned nephew, an autistic eight-year-old named Zachary (K'Sun Ray), comes to live in Phillip's lavish apartment, Phillip wants no part of surrogate fatherhood and tries to pass the youngster along to his cousin Rose (Miriam Flynn), who happens to live near a group home for special children. But Zach nixes this idea and insists upon living with Phillip, thus throwing together two extremely self-absorbed, obsessive-compulsive characters under one roof. This being a Hallmark Channel presentation, Fielder's Choice will undoubtedly work its way toward a happy and heartwarming finale, though it definitely takes some doing! The film made its TV bow on June 18, 2005.

Dana
as Dog
View All

There are no critic reviews yet for Fielder's Choice. Keep checking Rotten Tomatoes for updates!

There are no featured reviews for Fielder's Choice at this time.