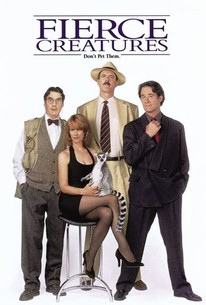 Critics Consensus: Fierce Creatures reunites A Fish Called Wanda's talented ensemble for a comedy that, while not without its moments, suffers from diminishing returns.

Critics Consensus: Fierce Creatures reunites A Fish Called Wanda's talented ensemble for a comedy that, while not without its moments, suffers from diminishing returns.

Critic Consensus: Fierce Creatures reunites A Fish Called Wanda's talented ensemble for a comedy that, while not without its moments, suffers from diminishing returns.

In this satirical and sexy film, New Zealand publishing-magnate Vince McCain has just purchased Marwood Zoo. When the zoo turns out to be relatively unprofitable, Rollo Lee is sent to carry out a number of ridiculous schemes to turn it into a money-making attraction.

Pat Keen
as Her Mother

Denis Lill
as Her Husband

Steve A. Clarke
as Puppeteer

The spirited cast of Jamie Lee Curtis, Kevin Kline and Monty Pythonites John Cleese and Michael Palin is willing. But this tossed-together trifle about an unassuming British zoo taken over by a money-mad Murdochian media mogul is weak.

It lacks the hair-trigger timing, the headlong rush into comic illogic, that made Wanda so special. But it does have a charm of its own, and moments of wicked inspiration.

Some funny moments peppered with lots of sexual innuendo.

A sporadically funny but very confused follow-up to A Fish Called Wanda.

If you disliked "Wanda", you'll loathe this!

It has little of the wit and none of the bite of "A Fish Called Wanda."

A misguided, neverending bellyflop of a film.

So back in 1988 there was a highly quirky, sexy British crime heist movie with a mix of top cult British and American stars, it was a huge (and surprising) success. Nine years later the same team were back in this sort of sequel, or maybe prequel, no one was really sure. In the end it was just another comedy utilising the same cast, however, the novelisation of the film actually explains how both movies connect, but no one cares about the book so... The plot is radically different from the 'A Fish Called Wanda', this is not any kind of crime comedy but it still involves unscrupulous people. Its all about John Cleese's character Rollo coming to look after a small typically British zoo of mainly small harmless animals, which he then tries to convert into a zoo full of fierce creatures. He has to do this because the main company he works for (that own the zoo) wants better revenue from the attraction hotspot. Thusly he is instantly at odds with the zoo's team of caring keepers who obviously are against this. At the same time Rollo must contend with Willa Weston and Vince McCain (Jamie Lee Curtis and Kevin Kline) who are overseeing this latest acquisition by the company to make sure it makes money. You see the problem with this comedy is the fact they have tried to basically remake 'Wanda'. Many of scenes in this film are rehashes from the original and are going for exactly the same laughs, the cast are playing virtually the same kind of characters and in the case of Jamie Lee Curtis her characters name has clearly been made as close as possible to Wanda (Willa). I really don't understand why they have done this because everyone knows this kind of thing hardly ever works, it doesn't matter how grand your cast roster is. Much of the said cast is of course taken from the first movie, and I don't just mean the main cast either, many smaller roles and cameos feature actors/actresses from the first movie. Does that somehow make things better? are these actors suppose to connect this story to the first movie somehow? Apparently not as this is supposed to be more of a stand alone movie...so why use the same cast then?? I mean sure the use of the classic British comedic legend Ronnie Corbett is very nice, a nice addition, but he barely does anything and is clearly there just to ramp up the star meter. Its an all British type affair so lets get some British gems of comedy...yeah OK but at least make use of them, at least make a good film with them. I mean watching Cleese in this is actually cringeworthy, he's doing all his usual typical funny little quirks he's done his entire career because that's what people expect, but its old hat now. He brings nothing new to the table here which isn't entirely his fault because (like I said) people wanna see that but you gotta try and break the mould guy! In short Cleese is basically Basil Fawlty in charge of a zoo...but not as funny, sweet idea, but like I said its not as funny as it sounds. At the same time watching Cleese trying to act sexy and dashing whilst cuddling up to Curtis (again) is horrible!! its like watching your aging dad trying to be sexy n cool with a younger woman, God no! As pointed out already Curtis plays the same character again too, a sexual female predator that is after Rollo but has to shake off the ever lurking Vincent (Kline), yet again. This leads to Kline who (as in the first movie) is head and shoulders above the rest giving the best performance. Kline seems to be really really good at playing the brash, pig-headed, egotistical Yank that won't think twice about being a complete shit no matter who's watching. He's rude, arrogant and cruel (yet again) and has his target set on Cleese's character Rollo (yet again), you notice I'm having to type 'yet again' quite often here. Do I have to mention Palin and his character that bares a remarkably close resemblance to his character in 'Wanda'? Nope, its the same character. Don't get me wrong this isn't a terrible movie, its not all bad, there are some nice moments of farcical humour, just not that much is all. It has everything you'd expect from a naughty British comedy that has two Pythons in it (no not the scaly reptilian kind). Characters running around in their underwear (Cleese again!), lots of sexual double entendres, silly visual gags, pratfalls, slapstick and the odd hint of violence which you of course don't actually see. Thing is, the first movie was a smart, witty, sexy, dark comedy aimed at adults. This movie is a childish, immature, infantile, watered down excuse of a comedy that isn't really aimed at anyone. The kids won't appreciate the performances (or at least what they were aiming for) and there's nothing too visually appealing going on for them either, whilst its way too dumb and soft for adults. There's no point having Jamie Lee Curtis looking all slinky if she's not gonna actually do anything. I think the idea for a quaint little British zoo battling against corporate suits is fine and has promise, but its been completely squandered here. For the first time ever I would have to say that the shenanigans of both Cleese and Palin actually bored and annoyed me at times. I've never really come across a movie that has tried to pretty much copy its predecessors formula so blatantly. I mean seriously! why would you even watch this when you have the first movie which is exactly the same and so much better.

Vince: Round here, he's known as Rod Almighty!  "Don't pet them." What many have said is that Fierce Creatures is crap compared to the hilarious A Fish Called Wanda. I will say that even if we didn't have A Fish Called Wanda, this would still be a major disappointment. The movie just doesn't work. It's half as smart and one third as funny. The only thing it has going for it is its returning cast from Wanda. John Cleese always makes movies at least watchable and I will say that this was at least watchable. The story takes place in a zoo where a bunch of zookeepers and its original director fight to keep it alive despite a father-son(Kevin Klein) that hurt its integrity and threaten to shut it down. There's nothing here that is at all hilarious and when its at its best, it just manages to be amusing. It all manages to seem like a cash in on Wanda, which in reality, it is. Basically the movie recycles the same jokes throughout the movie and the sad thing is that the jokes weren't funny the first time. It's all sexual innuendo sometimes including animals and the jokes are always used in the same context; making for an extremely dull comedy. This was a disappointment in every possible way.

An hour and a half of smiling!

The formula seemed right, as it worked for the critically acclaimed, Oscar winning, laugh riot that is A Fish Called Wanda, but in this toned down, cute animal fest, the same dynamic was lacking. Though John Cleese, who is a great screenwriter as well as a comedian among men, was just as brilliant as ever, the error of casting Michael Palin as some boorish bug zoologist, and Kevin Kline as a spoiled (though it wasn't truly evident) heir to a father who is also played by Kline, was misusing the cast's talents for mediocre roles. Jamie Lee Curtis, who has played the sex centered love interest time and again, should have been given more credit in her role, which underwhelmed. It had some great potential, and there were the occasional laughs, but this just as good as the original. *Spoiler Alert-In the very last scene Cleese calls Curtis Wanda instead of Willa, which at least was a great ode to their past performances together.