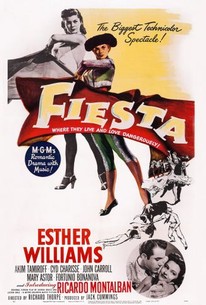 Ricardo Montalban and Cyd Charisse make their debuts as leading actors in this musical that features authentic Mexican music as well as two production numbers featuring the music of Aaron Copeland. The story centers on a matador's son who though pressured to become a bullfighter, really aspires to become a music composer. His twin sister, herself an accomplished toreador, helps to save family face and her brother's reputation by masquerading as her brother in the ring. Unfortunately, trouble follows when she is exposed. Her father is at first heart broken, but eventually he frees his son to pursue his dreams and be with the woman he loves. Songs include: "La Bamba," "La Luna Enamorada," "Miriano," and "Romeria Vasca."

Jean van de Velde
as Maria Morales as a child

Joey Preston
as Mario Morales as a child

Frank Yaconelli
as Pablo
View All

You'll find much to like in this tuneful and relaxing Technicolor musical.

Ricardo Montalban commands this film; I'd like to see his second one.

There are no featured audience reviews yet. Click the link below to see what others say about Fiesta!