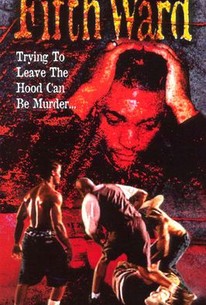 Greg Carter made this low-budget look at life in a Houston inner-city neighborhood where the brother of convenience-store clerk James (Kory Washington) is murdered. With gangster Bam (Creepa) supplying guns, James has an opportunity to get revenge, but he's unwilling to kill. Instead, he hangs out with his Vietnamese girlfriend, Haan (Junie Hoang), the daughter of the store's owners, and he also pals around with his buddy Rip (Lee Carter). Tensions erupt when James defends his mother (Donna Wilkerson) and younger brother (JaCorrey Lovelady) from the violent actions of his mother's menacing boyfriend (Thomas Miles). Shown at the SXSW Film Festival (Austin).

Steve Green
as Lindsey
View All

There are no critic reviews yet for Fifth Ward. Keep checking Rotten Tomatoes for updates!

There are no featured audience reviews yet. Click the link below to see what others say about Fifth Ward!