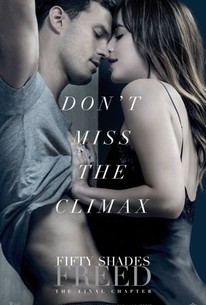 Critics Consensus: Fifty Shades Freed brings its titillating trilogy to a clumsy conclusion, making for a film franchise that adds up to a distinctly dissatisfying ménage à trois.

Critics Consensus: Fifty Shades Freed brings its titillating trilogy to a clumsy conclusion, making for a film franchise that adds up to a distinctly dissatisfying ménage à trois.

Critic Consensus: Fifty Shades Freed brings its titillating trilogy to a clumsy conclusion, making for a film franchise that adds up to a distinctly dissatisfying ménage à trois.

Believing they have left behind shadowy figures from their past, newlyweds Christian and Ana fully embrace an inextricable connection and shared life of luxury. But just as she steps into her role as Mrs. Grey and he relaxes into an unfamiliar stability, new threats could jeopardize their happy ending before it even begins.

The dialog is very terrible. And the problem, therefore, is that the actors have to wrestle with very terrible dialog.

Its makers have somehow convinced themselves that there's not only a story we care about, but an arc to be followed.

Even the likable stars, Jamie Sidegroin and Dakota Frontboob, can do nothing with material that has grown more tedious with each installment.

Freed appeals to women's biological urges-to secure a protective mate, to nest, to procreate-and depends on them leaving their brains at the theater door.

The Fifty Shades trilogy is an incredibly inept addition to the genre, with padded scenes, no narrative spark whatsoever, and silly coincidences about Christian's troubled past that stand in for revelations that may lead to mending.

It's as doofily entertaining, eye-rollingly awful, surprisingly steamy, and expectedly boring as all the other Fifty Shades films.

These movies, I think, are meant to be sexy romps, a bit of fun, but at the end of the series have proven themselves to be ten pounds of sex toys in a five pound bag.

When things become downright comical, it's nevertheless still watchable in its badness.

The simple truth is that Ana and Christian are still wholly unconvincing in their coupling.

This trilogy is the film equivalent of bad sex. Part 1 was awkward foreplay. Part 2 went through the motions with monotonous moves. And now, Part 3 reaches a clumsy climax that's so obviously fake that you just want it to end.

'Don't miss the climax,' the ads declare. What climax? Fifty Shades Freed falls flat of even reaching a plateau, just flailing around on the floor instead.

Another piss-poor piece of filmmaking, Fifty Shades Freed is a meandering and insipid romantic(?) drama. Somewhere in here there's a story, but it's really hard to find; something about Anna's former boss trying to get revenge of some kind. And the Christian/Anna relationship still feels abusive, with Christian controlling what Anna does and who she sees (relenting only occasionally). The actors don't have any chemistry (even after three films), giving lackluster performances. And other than one car chase, none of the action scenes are very exciting or intense. Fifty Shades Freed plays more like an epilogue to the last film and fails to deliver a compelling story.

For the sake of our benefit, can we already not get another nomination for worst picture of the year this early again? Fifty Shades Freed is the conclusion to this painful trilogy, yet even still, I can't even go this far onto this forsaken franchise and I wish I could regret watching every installment in this blender of a franchise.

It has been a year of fictional adaptation threequels, and it's only fitting that both the Maze Runner and Fifty Shades... franchises have finished, seeing as how they are both inane IPs piggybacking off of the success of The Hunger Games and Twilight respectively. I hate to say it, but Fifty Shades Freed has been a massive disappointment. Not only is it less funny than Fifty Shades Darker, but also I had to put myself at severe risk of embarrassment for attending an opening night screening. It was like I stumbled into a mothers' day bachelorette party at a sorority, and I'm certainly no Magic Mike. I'm also pretty sure the usher walked by me about six times just to make sure I wasn't masturbating. Although if you were to replace Danny Elfman's score with one of his more whimsical works like Beetlejuice or Flubber the jerking motions would be more aesthetically fitting. In this thrilling final chapter to a sensuous and senseless fluff saga, watch Jamie Dornan grow a beard within two minutes then shave it off in the subsequent two minutes after Dakota Johnson says: "You should shave." If that isn't enough to get you going, there are some topless softcore scenes (one of which contains a major plot point) set to slow jams that will unfortunately never be seen by Chinese audiences . That's alright as there is no real plot to speak of, just travel montages, a few sex scenes jammed into the first two acts, and a generic threat from the past. You see, the bad guy, Jack, was raised in the same orphanage as the good guy, Christian, but somehow Christian doesn't remember growing up with the primary antagonist of the last two movies. As a side note, that's literally the twist of Spectre. This does give them an opportunity to discuss the nature of privilege. If Jack had been adopted by Christian's parents, is it possible he would be a dashing billionaire that wooed the sultry Anastasia Steele? Would Christian have ended up the desperate and abusive antagonist? They both decide "no", so that's that. Johnson does pronounce "promiscuous" "per-mis-cuw-iz", and later there's a scene where Dornan burns some marinara. "There's got to be a better way!" The movie ends with a montage recapping the entire three movies including scenes from earlier in this film, and it's set to, you guessed it, slow jams.