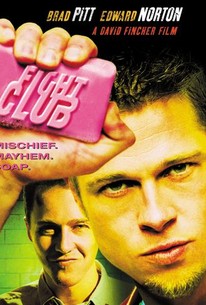 In this darkly comic drama, Edward Norton stars as a depressed young man (named in the credits only as "Narrator") who has become a small cog in the world of big business. He doesn't like his work and gets no sense of reward from it, attempting instead to drown his sorrows by putting together the "perfect" apartment. He can't sleep and feels alienated from the world at large; he's become so desperate to relate to others that he's taken to visiting support groups for patients with terminal diseases so that he'll have people to talk to. One day on a business flight, he discovers Tyler Durden (Brad Pitt), a charming iconoclast who sells soap. Tyler doesn't put much stock in the materialistic world, and he believes that one can learn a great deal through pain, misfortune, and chaos. Tyler cheerfully challenges his new friend to a fight. Our Narrator finds that bare-knuckle brawling makes him feel more alive than he has in years, and soon the two become friends and roommates, meeting informally to fight once a week. As more men join in, the "fight club" becomes an underground sensation, even though it's a closely guarded secret among the participants. (First rule: Don't talk about fight club. Second rule: Don't talk about fight club.) But as our Narrator and Tyler bond through violence, a strange situation becomes more complicated when Tyler becomes involved with Marla (Helena Bonham Carter), whom our Narrator became infatuated with when they were both crashing the support-group circuit. Based on the novel by Chuck Palahniuk, Fight Club was directed by David Fincher, who previously directed Pitt in the thriller Seven. ~ Mark Deming, Rovi

Ezra Buzzington
as Technician No. 2

Rob Lanza
as Man in Suit

Holt McCallany
as The Mechanic

Robby Robinson
as Next Month's Opponent

Edward Kowalczyk
as Waiter at Clifton's

Perhaps it is postmodern filmmaking, whatever that means. In any case, Fight Club remains the ugliest, most inhuman film since Natural Born Killers.

The movie demands a certain attention and is not easily dismissed, but there is something deeply unsettling about a work that uncritically espouses brutality as a function of alienation and nonconformity.

An outrageous mixture of brilliant technique, puerile philosophizing, trenchant satire and sensory overload, Fight Club is the most incendiary movie to come out of Hollywood in a long time. It's a mess, but one worth fighting about.

Oh, for the time when men were men and were encouraged to beat the tar out of one another. That's the world "Fight Club" pines for.

Fight Club jettisons its sense of humour 60 minutes in, and, so far from satirising the tiresome "crisis of masculinity" stuff sloshing around the airwaves either side of the Atlantic, the film simply endorses it.

It is working American Beauty-Susan Faludi territory, that illiberal, impious, inarticulate fringe that threatens the smug American center with an anger that cannot explain itself, can act out its frustrations only in inexplicable violence.

The first rule of Fight Club, as we're constantly reminded, might not be to talk about it, but once seen, it is most certainly not forgotten, even 22 years on.

Let's not get away from the fact that Fight Club is awesome.

David Fincher is an interesting director whose films more often than not work for me, Fight Club is a notable exception.

Cult films are seldom great films, they just connect with a corner of the audience more intensely than was intended, elevating their status. That's "Fight Club." And appealing to the wrong sort of cult just makes that clearer.

It's bold, it's gritty, it's rebellious, it's unapologetic, it takes risks, and it's narrator reflects the frustrations of many people.

Fight Club represents the desperate cry of the consumerist modern man for something to end his anxiety and conformism - which takes shape as a brutal anarchy of religious echoes -, and this is a dangerous movie whose brilliant, powerful statement may not be fully grasped by a mainstream audience.

David Fincher's adaptation of Chuck Palahniuk's acclaimed novel is dark, unorthordox and sickly in many ways. Fight Club presents a superb case of strong performances from Norton, Pitt & Bonham Carter along with an intricate presentation, making this a cult film that resonates in today's age of film-making. 4/5

A yuppie comes under the influence of an enigmatic stranger who encourages him to shed the trappings of modern consumerist life and begin an underground bare knuckle boxing club to rediscover his manhood. The 90s created a whole generation of nihilistic smart asses who found their standard bearer in Tyler Durden. Fight Club was a bit of a phenomenon upon its release and it seemed to speak to the the disenfranchised youth of Generation X in a way that nothing had before and being one such example, I hailed it as a masterpiece as did many others. Looking back, it's really far more a smug indie comedy than serious drama and I can't quite believe that anyone really took it seriously. It was for all intents and purposes the death knell of said generation even though we didn't really see it at the time, Palahniuk was showing us the ultimate futility of that way of thinking. It's amusing how a charismatic self styled guru can create such a cult of personality (which is no doubt how many forms of organised extremism find their way into existence) and Brad Pitt cuts a very imposing and frankly hilarious figure as Durden. In fact the whole thing smacks of the kind of creativity in all areas that we rarely see in mainstream cinema and as such is still well worth seeing. But I can't help feeling that Fight Club was the logical extension of Project Mayhem itself; a practical joke that people took way too seriously!