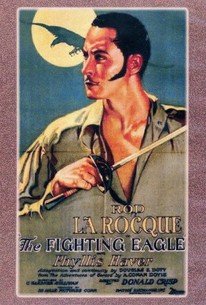 This Cecil B. DeMille-produced swashbuckler was based on Brigadier General, a story by Sherlock Holmes creator Arthur Conan Doyle. Set during the Napoleonic era, the film stars Rod La Rocque as young adventurer Etienne Girard, who becomes involved in the political intrigues fomented by the duplicitous Talleyrand (Sam de Grasse). Girard ends up rescuing gorgeous diplomatic courier Countess de Launay (Phyllis Haver) from Talleyrand's clutches, then takes it upon himself to deliver the important papers which the Countess was transporting to the anti-Napoleon forces. Julia Faye, Cecil B. DeMille's longtime "secret" sweetheart, is seen briefly as Napoleon's wife Josephine, while Napoleon is curiously portrayed in the style of a Jewish vaudeville comedian by Max Barwyn.

There are no critic reviews yet for Fighting Eagle. Keep checking Rotten Tomatoes for updates!

There are no featured reviews for Fighting Eagle at this time.