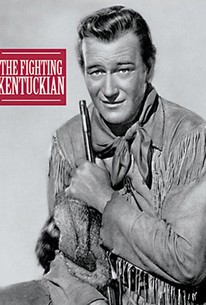 Set shortly after the Battle of New Orleans, the film casts John Wayne as John Breen, a Kentucky trooper making the long journey homeward with his confreres. Breen becomes involved with a plan by robber baron Blake Randolph (John Howard) to deprive hundreds of French army refugees of land granted to them by an Act of Congress. Championing the cause of the refugees, Breen does his best to defeat Randolph and his minions--and to prevent the villain's marriage to Fleurette De Marchand (Vera Ralston), the daughter of a former French general (Hugo Haas). Oliver Hardy makes a rare appearance sans Stan Laurel as Wayne's pugnacious, philosophical sidekick Willie Payne.

Critic Reviews for The Fighting Kentuckian

Its overall mediocrity doesn't get in the way of its pleasant presentation.

Audience Reviews for The Fighting Kentuckian

There are no featured audience reviews yet. Click the link below to see what others say about The Fighting Kentuckian!