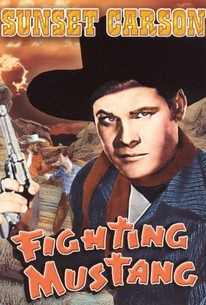 Filmed back-to-back with three other Sunset Carson vehicles in 1947, this Yucca Pictures Western starred the former Republic cowboy as a Texas Ranger chasing a gang of rustlers into the notorious outlaw territory of Three Corners. Attempting to sabotage the proposed annexation of the territory, desperado Bart Dawson (Stephen Keyes) and his men ambush Sunset and his young trainee Jed (Al Terry). The villains, who have been terrorizing pretty trading post operator Helen Bennett (Patricia Starling), are eventually defeated by the rangers in a violent gun battle and the planned annexation takes place on schedule. For all intents and purposes, the handsome but wooden Sunset Carson ended his screen career with this series of extremely low-budget Westerns, originally filmed in 16mm and released by that dumping ground of Poverty Row flotsam, Astor Pictures.

There are no critic reviews yet for Fighting Mustang. Keep checking Rotten Tomatoes for updates!

There are no featured reviews for Fighting Mustang at this time.