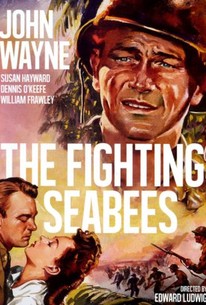 The Fighting Seabees is Republic Pictures' rip-roaring tribute to the US Navy's Construction Batallions (C.B.), without whom no plane would ever have gotten off the ground during WW2. John Wayne stars as Wedge Donovan, head of civilian construction company stationed in a pre-Pearl Harbor South Pacific war area. Despite Donovan's pleas to the Navy brass, he is denied permission to train his men for combat, the better to stave off imminent Japanese attack. Only after incurring heavy losses is Donovan given a commission and his men officially enlisted in the Navy. The self-sacrifical climax, as Donovan destroys a Japanese tank batallion at the cost of his own life, is one of the best-staged action highlights of its kind. As Constance Chesley, Susan Hayward finds herself in the unenviable position of being the apex in a romantic triangle involving herself, Wedge Donovan and Lt. Cmdr. Robert Yarrow (Dennis O'Keefe); her climactic speech, explaining how it's possible to love two men equally, is so well delivered that it transcends its essential corniness. Of the supporting cast, William Frawley stands out as Irish seabee Eddie Powers, who virtually signs his own death warrant when he begins singing happily just before an enemy sneak attack.

Hal Taliaferro
as Seabee
View All

Critic Reviews for The Fighting Seabees

One of John Wayne's popular WWII movies, in which his hero shows the exepected rebellious independence.

Audience Reviews for The Fighting Seabees

No more no less than a propaganda film, made during wartime. Wayne plays a construction chief convinced to the necessity of training construction workers to fight as well. There's a couple of good action scenes and Susan Wayward for the curious love angle ( she's the only female around on a Japanese held island!). Standard fare.