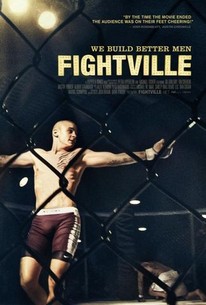 Over the last decade, Mixed Martial Arts (MMA) has grown from a controversial no-holds-barred gladiatorial sideshow into a billion dollar phenomenon eclipsing boxing as the dominant combat sport in the world. But far from Las Vegas, in sweat-soaked gyms and low-rent arenas across America, the big lights are but a dream. Here, men fight to test their mettle, fortified with the mythic promise that an ordinary man can transform into a champion. Fightville is about the art and sport of fighting: a microcosm of life, a physical manifestation of that other brutal contest called the American Dream, where men are not born, but built through self determination, hard work and faith. It may be a myth, but in Fightville, that's what champions are made of. -- (C) Official Site

Critics Consensus: The Lucky One Can’t Catch a Break

'Fightville," you had me at "gladiator school."

An up-close but superficial portrait of aspiring MMA stars as they fight their way through the Cajun Country regional circuit.

Ms. Epperlein and Mr. Tucker have talent and resolve - they spent months shooting "Fightville," a commitment that's scarcely evident - which makes the movie's superficiality all the more frustrating.

"Fightville" feels authentic about this world, where success may be measured in wins, but the balance of unrelenting brutality and self-discipline needed for those wins is a trickier equation.

The filmmakers take a mostly effective Hoop Dreams approach in showing how young hopefuls test the limits of their abilities and their economic situation.

It doesn't seem to display much of a point of view at all.

Fightville takes the spotlight out of Las Vegas and shines it on southern Louisiana, taking a hard look at the grueling underside of MMA fighting through the perspectives of four dedicated men.

An exhilarating sports documentary and a levelheaded, piercingly intelligent treatment of a touchy subject.

The bumpy road to success as a mixed martial arts fighter is ambiguously investigated in this amateurish documentary by the directing/editing team of Michael Tucker and Petra Epperlein.

A shrewdly observed MMA doc [that's] the equivalent of an unexpectedly delightful conversation with a potluck-seated dinner companion with whom you thought you might have nothing in common.

...not an investigative documentary but a celebration of a subculture which is aided by an excellent technical package...

Aside from illustrating the rigors of training, Fightville doesn't offer much else, other than a look at the small-time quality of this circuit.

Boring individuals talk about their aspirations to reach the top of a boring sport. Perfect to fall asleep to.

"We build better men." A documentary that focuses on a group of young athletes in southern Louisiana as they work toward achieving their goals of becoming professional mixed martial arts fighters.

REVIEW
Fightville was an insightful look at the intense world of MMA hopefuls fighting for the chance to earn a pro contract. The directors portrayed the characters in a way that made you root for them and feel like you were right there watching them struggle and succeed. This film will appeal to both UFC fans and non fans alike. The young fighters featured from the Lafayette, Louisiana area are as authentic as they come. The raw footage captures the intensity and sacrifice these warriors make. UFC and other pro fighting circuits are the quickest growing professional sports franchise worldwide. Young wrestlers, MMA fighters and boxers are gravitating toward the sport as a place where they can continue to pursue their dreams of being the ultimate warrior. Fightville shows us how they do it.