The File on Thelma Jordon1949 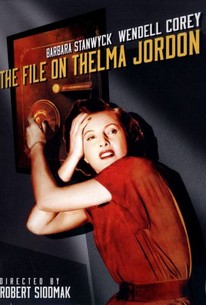 The File on Thelma Jordon Photos

No one is as good as Barbara Stanwyck when she's bad. Here Stanwyck plays Thelma Jordon, a woman who late one night shows up in the office of happily married Assistant DA Cleve Marshall (Wendell Corey) to seek help in solving the string of robberies at her wealthy aunt's estate. Before Cleve can stop himself, he and Thelma are involved in an illicit affair. But Thelma is a mysterious woman, and Cleve can't help wondering if she is hiding something. His suspicions are confirmed when Thelma confesses to him that she is married to Tony Laredo, though she swears that she never wants to see him again. When Thelma's aunt is found murdered, Cleve's suspicions are aroused once again, but he is too love-struck to keep himself from being drawn into the complicated series of events that ultimately lead to his ruination. Siodmak directs with his usual skill and polish, but the film really belongs to Barbara Stanwyck who is magnificent as Thelma. Unlike the usual cold, passionless femme fatale of film noir, Thelma has a heart and a conscience. She comes to love Cleve, and has concern for his life and his future. However, despite her wish that her life could be different, she realizes that she belongs in Tony's world, and despite her attempts to sacrifice herself to save Cleve, he is doomed, by his love for her and by his own weaknesses. The File on Thelma Jordan is a romantic, unusual mystery, with a great performance and superior direction. ~ Hal Erickson, Rovi

Virginia Hunter
as Secretary to the District Attorney

Eddie Parks
as Proprietor
View All

Critic Reviews for The File on Thelma Jordon

The performances by both Stanwyck and Corey are strong.

Audience Reviews for The File on Thelma Jordon

Wendell Corey as a smart assistant district attorney, bored with his marriage, who meets a mysterious woman that nonetheless "gets" all of his jokes. As smart as the guy is, he never questions the timing of the meeting, even while it seems to work in her favor more and more. Babs, of course, is the woman, a girl who never met a situation that she couldn't twist while looking you dead in the eye. Noir dreamers, come home. Paul Kelly's good too.

The File on Thelma Jordon Quotes