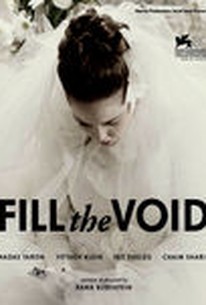 Eighteen-year-old Shira (Hada Yaron) is the youngest daughter of the family and is about to be married off to a very promising young man of the same age. On Purim, her twenty-eight-year-old sister, Esther (Renana Raz), dies during childbirth, leaving her husband to care for the child and postponing Shira's promised match. When the girls' mother finds out that Yochay may leave the country with her only grandchild, she proposes a match between Shira and the widower, which leaves Shira to choose between her heart's wish and her family's wish to keep the child with them. FILL THE VOID was the 2012 Venice Film Festival winner for Best Actress (Yaron), and has been selected as the Israeli entry for the Best Foreign Language Oscar at the 85th Academy Awards. It will also be featured in the Spotlight Program at the 2013 Sundance Film Festival. (c) Sony Classics

Melech Thal
as Rabbi
View All

Critic Reviews for Fill the Void

[Rama] Burshtein oppressively captures the claustrophobia of a close-knit community where every daily act - from opening a door to eating - is a religious ritual.

As opposed to the bleak view of sexual subjugation in Kadosh, Amos Gitai's 1999 film about Hasidic marriage, Fill the Void sees Burshtein fortrightly and wittily asserting that this is how her community lives.

An intelligent and moving examination of the possibilities of personal freedom within the strict confines of religion and tradition.

There is perhaps something ultimately undeveloped about it, but the film is a well acted, well presented piece of work.

Fill the Void is as well-versed in the rules of matchmaking as a Jane Austen novel, and it bends them as artfully as wicker.

Its last five minutes are so extraordinarily enigmatic, you're certain the subject of innocence, guilt and attraction has been addressed on a deep level.

While Burshtein does offer up that sense of reverence and communal commitment, she doesn't idealize the community and isn't afraid to show the more business aspects of Purim.

Steeped in tradition, religion and ritual, Fill The Void fills a void in cinema with warmth and insight into the mysteries of love and life.

Almost all of the film's characters are so well-rounded, and their personal and moral nagging so well-defined, that every single shot feels full of life and vitality. Most commendable of all, Burshtein treats her subject with delicacy.

For better or worse, Burshtein elides a specific critique of the religious ideology that has forced Shira into marriage in the first place.

Fill the Void is an astonishing film, a masterful piece of art that feels like the work of an established veteran but is instead the debut of a woman who, like the married women in her film, sees her family as the center of her life.

Audience Reviews for Fill the Void

Israeli powerhouse Rama Burshtein is the first female Orthodox Jewish director to make a film outside of the community, for wider distribution. She wrote and directed "Fill the Void," a film about the marital prospects of Shira, who realizes she wants to marry her sister's widower. Read more at http://www.bluefairyblog.com/reviews/2015/5/22/fill-the-void

Yet another culture that I do NOT get. Poor, poor girl. This is a roughly made Hebrew film. Interesting to watch. Kind of slow...

I feel that the film is definitely worth watching although some of the scenes and the ending seem to be end at the wrong moment; when you really want to find out what a characters says next or what he/she does. I suppose these could be only minor flaws in an otherwise fantastic film, but these details did make it anticlimactic for me. Perhaps this brings a welcomed ambiguity that is lacking so often in many films. Despite this, I cannot deny the emotional charge with which the leads bring to their performance. I keeps you captivated.

In "Fill the Void," Esther(Renana Raz) and Yochay(Yiftach Klein) are on the verge of expecting their first child when they also receive the happy news that Esther's younger sister Shira(Hadas Yaron) has just gotten engaged. And then tragedy strikes as Esther dies in childbirth. In the meantime, Shira and her mother Rivka(Irit Sheleg) help out best they can by taking care of the baby. However, that might not be for much longer as Rivka hears about a marriage proposal for Yochay from a widow in Belgium. "Fill the Void" is a gently subversive movie about the practice of arranged marriages in the Hasidic community in Israel that succeeds by leaving more things unsaid from its great opening scene in a supermarket to its ambiguous final shot. To be fair, it could be said that the parents only have the best interests of their children at heart but what happens when they don't? For example, Rivka does the wrong thing for the right reasons while Shira does the right thing for the wrong reasons. None of which will matter if everybody is not happy in the long run.