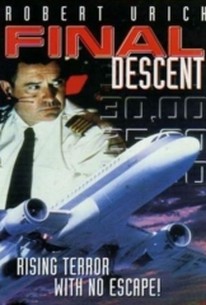 Robert Urich stars as a veteran airline pilot whose years of flying are put to the test after his jumbo jet is damaged in a mid-air collision in FINAL DESCENT, an action-adventure thriller distributed by Sony Pictures Television International, a Sony Pictures Entertainment company. When Captain Glen "Lucky" Singer prepares Angel Airlines Flight 19 for take off, both co-pilot and former girlfriend Connie Phipps and their supervisor Captain George Bouchard agree that everything seems normal. Yet seconds after take off, the jumbo jet is struck by a small aircraft which bursts into flames and crashes, leaving Flight 19 crippled beyond repair. Though Singer can still fly the plane, he can only ascend, leaving only a matter of time before the increasing altitude will cause it to disintegrate. Racing against time, Singer and company must bring their plane down safely with all its 319 passengers -- a task that is made all the more difficult by Bouchard's interest in Connie and his insistence on how to fly the damaged craft. With just over two hours before he runs out of fuel, Singer is assisted by the concerned crew on the ground, including an old flying buddy who's been patched through to him via radio. And despite all panic in the cabin, the terrified passengers can only cooperate with Lucky-and pray!

There are no critic reviews yet for Final Descent. Keep checking Rotten Tomatoes for updates!

There are no featured reviews for Final Descent at this time.