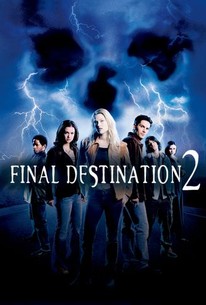 Critics Consensus: This sequel is little more than an excuse to stage elaborate, gory scenes of characters getting killed off.

Critics Consensus: This sequel is little more than an excuse to stage elaborate, gory scenes of characters getting killed off.

Critic Consensus: This sequel is little more than an excuse to stage elaborate, gory scenes of characters getting killed off.

Death lurks, and two teenage girls try to figure out where he's heading, in this sequel to the unexpected teen horror hit Final Destination. As Clear Rivers (Ali Larter), the only surviving passenger of the ill-fated Flight 180, waits in a mental institution, certain Death will claim her, Kim (A.J. Cook), who has begun to display precognitive powers, is driving along the highway when she sees a terrible accident in which several cars crash into a logging truck. Moments later, the horrible vision is gone, but Kim is certain she saw an accident that was supposed to happen but didn't...and now Death will track down the souls he meant to take that day who slipped through his fingers. A police officer, Thomas Burke (Michael Landes), believes there's a germ of truth in Kim's story, and teams her up with Clear in hopes that together they can help prevent Death from snuffing out any more of the people involves in the accident that wasn't. Tony Todd also returns from the first film as Mr. Bludworth.

Darcy Laurie
as Man in Elevator

John Stewart
as Paramedic at Farm

Cam Cronin
as Paramedic at Hospital

Pushing the limits of an R rating, this sequel to 2000's surprise hit starts with the blood dripping madly and then amps it up to levels as to now unseen in American horror.

It's simple, but effective.

When a horror flick gets tedious, it's DOA.

Part of the fun here is anticipating the Rube Goldberg-style machinations by which Death catches up with its targets.

That there is an audience for a movie in which innocent people suffer hideous accidental deaths is troubling enough, but that a group of creative people chose to direct their energies on this repulsive spectacle simply provokes disgust.

Final Destination 2 is legitimately an excellent movie; it's a fun and suspenseful film that manages to improve on the original in every way while also standing entirely on its own.

Just the fact that it manages to keep the viewer involved despite the plot's general ridiculousness makes it the most effective Vancouver-shot horror flick in years.

Now that the ground rules have been established for the Final Destination movies, the fun lies in seeing the inventive ways in which the writers dispatch the various characters in the sequel.

Decent at best this is a lighter, campier, but gorier sequel to the original.

Even more than Part 1, the real stars of this movie are the elegantly choreographed freak accidents.

One by one these people get bumped off, one by one the people in the audience laugh their asses off.

This sequel deserves credit for its spectacular first sequence, which is really tense and well made. What follows, though, is more tongue-in-cheek, making fun of Death's ingenious traps and with an intriguing idea about how the plot is influenced by the events of the first film.

4 stars, and that only for the blow-you-outta-yer-seat opening. The rest is the series typical Death as an implacable, invisible prankster force-of-nature ... and I can live with that. Don't get too attached to any characters.

Hey, I still enjoyed it. The premise was still fresh and creepy.