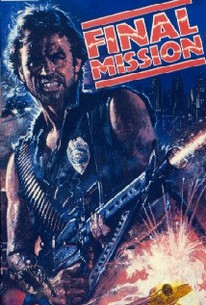 Revenge and violence are the key motifs in this action film by Philippine director Cirio Santiago. Vince (Richard Young) is a Vietnam vet who has been a shade too brutal in his handling of some petty thieves. His actions rankle the murderous minds of the thieves, and they exact revenge by blowing up Vince's pleasure boat with his wife and child on board. Now fueled with hatred, Vince not only goes after the killers, but with the help of a military friend, he determines who it was that supplied the technical, explosive know-how to the punks who blew up the boat. It seems Vince had an enemy during the Vietnam war who is in league with the murderous thieves. Once the two sides have been defined, a kind of mini-war results.

There are no critic reviews yet for Final Mission. Keep checking Rotten Tomatoes for updates!

There are no featured reviews for Final Mission at this time.