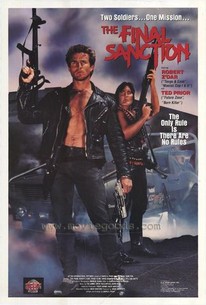 Stop us if you've heard this one before. A nuclear war has wiped out most of mankind. Still, the remnants of the United States and the Soviet Union haggle over who has "won". To settle matters, a single American (Ted Prior) and a single Russian (Robert D'Zar) are ordered to duke it out on behalf of their respecitvely countries-winner take all. We know that Final Sanction is an American-International project because William Smith is in it. The early-1990s collapse of Soviet Communism quickly converted Final Sanction into a period piece.

Ted Prior
as Sgt. Batanic

Tracy Benedict
as Claire
View All

There are no critic reviews yet for Final Sanction. Keep checking Rotten Tomatoes for updates!

There are no featured reviews for Final Sanction at this time.