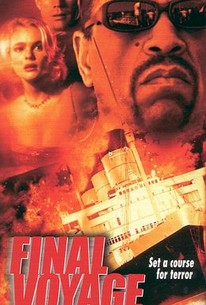 Modern-day pirates and a disaster at sea set the stage for this action drama. The sister ship of the Titanic has been refurbished and restored to service for a final cruise, and a number of wealthy celebrities and socialites are on board for the occasion, including film star Gloria (Erika Eleniak) and her bodyguard Aaron (Dylan Walsh). However, Josef (Ice-T), a daring and ruthless thief, sees a golden opportunity and invades the ship with a crew of henchman, intending to steal the many valuables on board. An explosion tears into the ship while Josef and his men are looting the cabins, and it falls to Aaron to capture Josef and his men before the ship meets its fate at the bottom of the ocean. Final Voyage also stars Claudia Christian and Jonathan Fuller.

Jonathan Fuller
as Millspawl
View All

There are no critic reviews yet for Final Voyage. Keep checking Rotten Tomatoes for updates!

There are no featured audience reviews yet. Click the link below to see what others say about Final Voyage!