Die Finanzen des Großherzogs (The Finances of the Grand Duke) (1924) 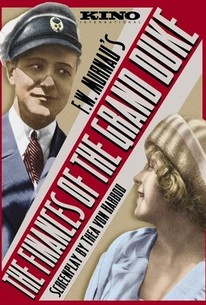 Director F.W. Murnau and scriptwriter Thea von Harbou both took a change of pace from their usual dramas with this satiric farce about Grand Duke Don Ramon XX (Harry Liedtke), whose idyllic country is threatened by revolution. The troublemakers are a trio of conspirators, working with a corrupt financier who intends to convert the landscape into a profitable sulfur mine. Don Ramon comes close to being hanged, but is rescued by Olga (Mady Christians), the Grand Duchess of Russia, who loves him and agrees to pay off all his debts. A compromising love letter from Olga falls into the conspirators' hands, but she and Don Ramon, with the help of the adventurer Philip Collins (Alfred Abel) are able to set their affairs right. Note who plays one of the conspirators: Max Schreck, who starred as the hideous vampire in Murnau's horror classic Nosferatu. ~ Nicole Gagne, Rovi

It should be seen by Murnau completists, and by anyone who's ever wondered what Max Schreck looks like out of his Nosferatu makeup.

Murnau bucked his reputation as a heavy dramatist via The Finances of the Grand Duke, a breezy mix of Ruritanian farce, romance, intrigue and adventure that isn't terribly funny, but remains charmingly light as a feather.

Feels fresh and invigorated where The Haunted Castle felt bloated and heavy-handed.

Liedtke's comic performance is somehow both relaxed and precise, and not as mannered as many of Murnau's other heroes.

I think I should re-watch this sometime. I really wasn't in the mood for it, I think, because I was just super bored with this movie, and stopped watching.