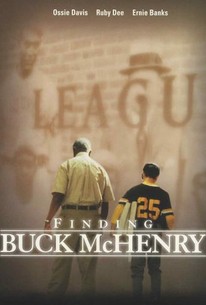 A boy discovers that his coach may be more than just a nice old man who likes baseball in this family-oriented drama. Jason, a kid who loves baseball, is not doing very well with his Little League team, and he is bumped from the regular line-up to an "expansion team" of kids who aren't making the grade. Determined to make good, Jason recruits a couple of friends who are strong players, and he discovers that his school's janitor, Mack Henry, knows the game backwards and forwards and is willing to serve as coach. With Mack's help, the team starts to show promise, but a visit to a baseball card collector's shop sparks a question in Jason's mind -- could Mr. Henry be Buck McHenry, the legendary star of baseball's Negro League? Finding Buck McHenry is based on the popular young people's book by Alfred Slote, and stars Ossie Davis and Ruby Dee.

All you have to know is that it stars the great Ossie Davis and Ruby Dee.

Really had fun watching this mostly because of Ossie Davis and Ruby Dee. A really great story, and also serves as a bit of a history lesson about the old Negro Baseball League.