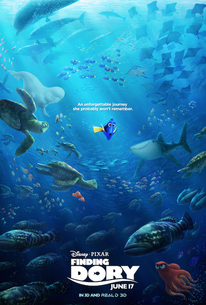 "Finding Dory" reunites the friendly-but-forgetful blue tang fish with her loved ones, and everyone learns a few things about the true meaning of family along the way. The all-new big-screen adventure dives into theaters in 2016, taking moviegoers back to the extraordinary underwater world from the original film.

Angus MacLane
as Sunfish "Charlie Back and Forth"

The 50 Highest-Grossing Movies of All Time: Your Top Box Office Earners Ever Worldwide
All Pixar Movies Ranked From Best to Worst
‘Tis the Season for 10 Film- and TV-Tied Video Games

The central irony of Finding Dory is that Dory is a risk-taker trapped in a movie that, for all its likability, won't join her on whimsical leaps.

Who would have thought one of the deepest films ever made about learning disabilities would star a talking blue fish?

Much like its titular character, it keeps swimming, and in doing so teaches all of us life lessons that we likely already knew yet still could use to revisit all the same.

Before a somewhat cluttered conclusion, Finding Dory is a truly touching film, graceful in its exploration of identity, family, and the way they intersect.

Finding Dory is inferior to Finding Nemo (and both Toy Story sequels). Those films are tesseracts, this one's a cube. That said, to label it average somehow misses the point.

It is approached with such charm and warmth that it hardly matters that the two films share such similar arcs.

There are few animated franchises that are as enchanting and powerful as this.

Finding Nemo and the studio uses every tool at their disposal to create a lush and magical under-sea world that will once again enchant audiences of all ages.

By focusing so deeply on the pain beneath Dory's happy-go-lucky exterior, the film still packs an emotional wallop.

Finding Dory still manages to elicit loud laughs, a few tears, and some poignant moments about the true meaning of family.

A worthy sequel to an outstanding predecessor.

It's essentially just a slick remix of Finding Nemo, but Finding Dory's emotional moments will definitely hook you in.

A funny and heartwarming sequel, is it as good as the original, no, not in my opinion! But still very much worth the watch!

The familiar voice talents help to fully emerge kiddies of all ages into this cutesy search for lost family, wherever they might be. Not top drawer Pixar but still better than many live action efforts by far.

This average sequel came only thirteen years too late, and it does lack a bit in terms of originality (especially since we are talking about Pixar), but at least it is entertaining and visually fantastic like what we have come to expect from the studio in terms of first-rate animation.