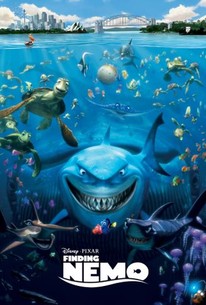 In this stunning underwater adventure, with memorable characters, humor and heartfelt emotion, Finding Nemo follows the comedic and momentous journey of an overly protective clownfish named Marlin (voice by Albert Brooks) and his son Nemo (voice by Alexander Gould) -- who become separated in the Great Barrier Reef when Nemo is unexpectedly taken far from his ocean home and dumped into a fish tank in a dentist's office. Buoyed by the companionship of Dory (voice by Ellen DeGeneres), a friendly-but-forgetful Pacific regal blue tang, Marlin embarks on a dangerous trek and finds himself the unlikely hero of an epic effort to rescue his son -- who hatches a few daring plans of his own to return safely home. -- (C) Official Site

Erik Per Sullivan
as Sheldon the Seahorse

Most of all, Finding Nemo is a touching tale which reassures you that even though things may look bleak, it will all turn out well in the end.

Finding Nemo offers as much in terms of thrills, frights, humour and psychological insight as it does in pure technical skill, proving that a movie can be art without being an "art" movie.

A splendid eco-friendly comedy set in the Great Barrier Reef.

The animation in Finding Nemo is quite breathtaking and this movie, created by Pixar, the same outfit that made Toy Story, looks like The Undersea World of Jacques Cousteau.

The tropical pleasure is a beautifully imagined adventure that beguiles children and tickles adults.

Finding Nemo is distributed by Disney, and it has what the most heartfelt Disney animated features used to have: rapturous imagery matched with real wit.

Finding Nemo teaches the classic Pixar/Disney lessons about the importance of family, acceptance, kindness, and love, but it also an exciting tale of adventure, overcoming adversity, and teamwork.

In its story, characters, and visuals, Finding Nemo reminds us of how remarkable- and poignant- a well made family film can be.

The visuals are as sharp as the scripting, succeeding with laughs, thrills, heartache, and unforgettable characterizations to craft an animated masterpiece.

Compared to other Pixar films, this may not be as good as the Toy Story franchise, but it's awfully close.

A family film that is truly for the whole family - from grandpop to grandson. Finding Nemo is a precious gem in the Pixar and Disney vaults. Exquisitely stunning, enchanting and magical from start to finish.

Debbie Lynn Elias
Behind The Lens
View All Critic Reviews (269)

Re-reviewing this movie having experienced the 3D version which is just sublime in its use of 3D and a stunning 5.1 soundtrack. As a Dad, I now have a much greater respect and love for this story.

Finding Nemo has grown on me over the years. It's not my favorite pixar movie by far, but it's definitely well made and visually flawless. The story isn't all that complex, but it doesn't need to when the backdrop is the real focus of the movie. The voice talents are, as usual, pretty good. I'm not crazy about Ellen DeGeneres as Dori, but i'm definitely in the minority on that. Overall it's a worthwhile experience and extremely entertaining.

Finding Nemo" is a wonderful animated adventure movie that simply is irresistible for young as well as older persons. The most excellent thing about "Finding Nemo" is the perfect timing, just like in "Monsters, Inc" the jokes are extremely well placed in a quick pace and are good for more then just a few laughs. There are some very fun and great characters which brings me to the only problem I have with this movie. There are too many minor characters, I would have really loved to see some of the characters getting a bigger role with some more importance to the story instead of meeting character after character that are only on screen for no more than 5 minutes (such as the sharks). Sure it's good for the sense of adventure but it leaves some missed opportunities to make the story even more fun. I think it's pretty obvious that the story is inspired on the "Lord of the Rings" trilogy since it uses lot's of elements from it and it has the some feeling of adventure and excitement so it's really not a big thing that the story isn't very original, the original and fun way the story is told in compensates for this. The voice cast as in many animated movies is impressive but the one that stood out was Ellen DeGeneres as Dory that you love to hate. Irresistible movie for the whole family with great jokes and lines and some memorable characters and situations. 4 Stars 9-21-07