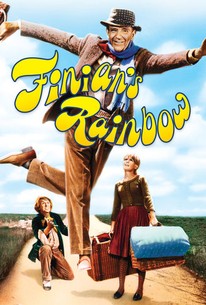 Finian's Rainbow is the first major film directed by Francis Ford Coppola. The musical comedy concerns the efforts of Irish immigrant Finian (Fred Astaire), who has stolen a pot of gold from a leprechaun. Along with his daughter Sharon (Petula Clark), the couple moves to the United States to the mythical town of Rainbow Valley. The two are soon pursued by Og the leprechaun (Tommy Steele) who seeks to take back the gold from Finian. Finian believes if he buries the gold in the ground, it will grow like an plant and multiply. Sharon befriends Woody (Don Francks), who is being driven off his farm by orders of a bigoted judge (Keenan Wynn). Comedy ensues when Og grants a series of wishes, one of them that turns the Judge into a black man. He experiences firsthand the indignities of racial prejudice in this song filled comedy. Choreographer Hermes Pan was hired at the assistance of Astaire, his longtime friend who had previously worked with Astaire. Pan was fired by Coppola, who referred to the dance scenes as "abysmal." Pan referred to Coppola as "a real pain." Studio executives were impressed with the fact Coppola completed the feature in seven weeks for under 4 million dollars. He would later hit his stride with The Godfather and would become one of the best directors in the last half of the 20th century.

Tommy Steele
as Og, the Leprechaun

Barbara Hancock
as Susan The Silent

A marvelous evening right up to its last shot of Astaire walking away down a country road.

It's Fred Astaire's last musical and a sorry farewell.

[Finian's Rainbow] looks as though it has been rehearsed for, say, two months, then photographed in a week's time.

Francis Ford Coppola, whose previous film was the bouncing You're a Big Boy Now, again directs like a bulldozer with a sense of humour.

Not as bad as legend has it, but Francis Ford Coppola's film of Finian's Rainbow can hardly be called good

An allegory of the end of the studio system, couched in archaic-modern mementos

One of many musical stinkers made during a decade infamous for them.

An inauspicious early Coppola film of a muscial that was already dated by the time the cameras rolled.

Astaire gives a dignified performance as the Irish immigrant with the leprechaun's pot of gold, Clarke is good as his feisty daughter, and the songs are hugely enjoyable.

Some great songs but it drags on forever.