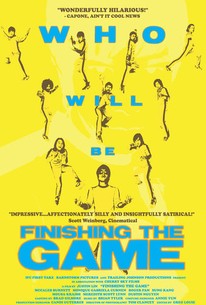 Critics Consensus: Though Justin Lin's premise is precocious enough, the sight gags and comic timing are tired in this mockumentary about Asian typecasting in the 1970s.

Critics Consensus: Though Justin Lin's premise is precocious enough, the sight gags and comic timing are tired in this mockumentary about Asian typecasting in the 1970s.

Critic Consensus: Though Justin Lin's premise is precocious enough, the sight gags and comic timing are tired in this mockumentary about Asian typecasting in the 1970s.

Better Luck Tomorrow and Fast and the Furious: Tokyo Drift director Justin Lin takes a comic look at a longstanding bit of cinema mythology with this mockumentary exploring the making of Bruce Lee's unfinished final film, Game of Death. When martial arts star Lee died in 1973 after having shot roughly 20 minutes of the full-length feature, director Robert Clouse vowed to complete the film using a Bruce Lee look-alike. Though the film was eventually released into theaters in 1978, fans continue to debate just how much involvement Lee had in the making of the film nearly three decades after the fact. Perhaps viewers will never know for certain just how much of Lee they are seeing in the final product, but in this knowing satire, director Lin offers a hilarious look at how things might have gone down while simultaneously skewering mainstream cinema for its stereotypical treatment of Asian-American actors. ~ Jason Buchanan, Rovi

News & Interviews for Finishing the Game

View All Finishing the Game News

Critic Reviews for Finishing the Game

This tedious mockumentary isn't even as entertaining as one of Ed Wood's actual films, and once-promising director Justin Lin has some karma to square for fumbling such a sure thing.

Intermittently funny at best, but mostly full of dead air.

A very funny, equal-opportunity broadside that targets Asian stereotyping, and not just by non-Asians.

What little potential there is ends up squandered within nanoseconds; as both a parody and a polemic, the film is finished before it's barely begun.

Finishing The Game doesn't get anywhere that Hollywood Shuffle didn't go to first.

Finishing the Game is an uneven effort...

You can easily tell how great a time everyone is having, and it's infectious.

What exactly he's trying to say about Bruce Lee's fame and impact or the banal reality of genre moviemaking is unclear at best.

The pace is flat, the celebrity cameos go nowhere, and the smugness of Lin's observations of Asian-Americans and Hollywood smothers the comedy.

There's about five minutes of funny in Finishing the Game, which leaves 83 minutes of "Oh, that same joke again, huh?"

Audience Reviews for Finishing the Game

OMG this movie is a trip! Love how it comically, but truthfully portrays the disappointment and racism actors of color face in Hollywood. Roger Fan was spot on as a pretentious, egotistical celebrity, Sung Kang played the innocent, wide-eyed actor from the South, and Brian Tee was almost unrecognizable as an emotionally and physically damaged Vietnam war vet!

At first glance the plot sounds interesting, but at the same time, may be a bit misleading. One may come to expect a serious documentary about replacing Bruce Lee for finishing the Game of Death. Instead the viewer is given a full on mockumentary.

What is a mockumentary? Basically, it is a comedic documentary and Justin Lin provides a fairly successful one with this film.

The style of this film plays out like it is done from the 70's, which is when the original Game of Death is from. The sound effects, the settings, the camerawork, and the costumes all contribute to the 70's look and feel. This film is only 85 minutes long and the first 15 of it is basically character introductions. The rest of the film follows these characters throughout the entire audition process. Just think of the early episodes in a season of American Idol.

The comedy is fairly consistent, although it does get a little tiresome in the latter parts of the film. The characters are hilarious and so are their lines of dialogue. The situations that the characters are put in set up humorous sequences, which a few of them also intertwine.

The acting is pretty good. There are a surprisingly number of noticeable faces playing small roles, like M.C. Hammer, James Franco, and Ron Jeremy. Yet, somehow the style of the film makes everybody seem like non-famous celebrities. This is actually a good thing.

This is not or nowhere near a Bruce Lee martial arts film, but fans of Bruce Lee films, or mockumentaries, may want to check this one out.

A spastic satire, as producers struggle to replace Bruce Lee.