Fire On The Amazon (Lost Paradise)2000 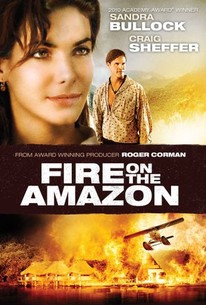 Two Americans abroad discover how high the price of activism can be in this drama. When a well-known environmental researcher is murdered in the Amazon jungle, an arrogant photojournalist (Craig Sheffer) joins forces with a beautiful young activist (Sandra Bullock) to find out who is responsible. Along they way, they fall in love as they discover the men responsible for the killing would be more than willing to murder again if it will keep them quiet. Fire on the Amazon was filmed in 1990, but it wasn't released until 1993, when Sandra Bullock's appearances in The Thing Called Love and Demolition Man made her a star on the rise. Legend has it that she also used gaffer's tape to insure that her breasts would not be fully exposed during the film's love scenes.

Critic Reviews for Fire On The Amazon (Lost Paradise)

Guys, trust me, the scant piece of Bullock booty that you get to see really isn't worth all the effort.

Audience Reviews for Fire On The Amazon (Lost Paradise)

Really rather slow and not that interesting to be honest. Seeing it was made in '91 I have to say the picture quality is very poor and even the dubbing is out of sync. It could have been better on a bigger scale, but it will be better known for a nude scene for Sandra Bullock in an early role for her.