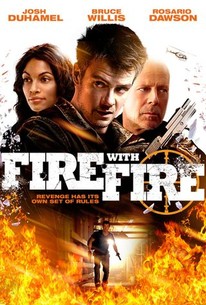 A firefighter who witnessed a deadly convenience store robbery enters the Witness Protection program, but is forced out of hiding after being targeted for death by the racist crime boss who's determined to see him dead. Jeremy Coleman (Josh Duhamel) was just finishing a long day of work when he ducked into the store for a few beers. Little did he realize his life was about to be changed forever. In the blink of an eye, ruthless white supremacist Hagen (Vincent D'Onofrio) bursts into the store, and guns down the clerk in cold blood. Terrified, Jeremy makes a daring escape amidst a hail of gunfire. Later, Hagan is arrested and police detective Mike Cella (Bruce Willis) takes charge of the investigation. When Jeremy sits down to identify Hagen in the line-up, however, the sociopathic madman reveals that he knows everything about the "anonymous" witness behind the two-way mirror. As Hagan's trial approaches, Jeremy is forced to give up his job to be placed in the Witness Protection program. Meanwhile, he enters into a passionate romance with U.S. Marshal Talia Durham (Rosario Dawson). When Hagan's attorney succeeds in having his client released from prison just weeks before the trial, the killer's henchmen come gunning for Jeremy and Talia. The situation turns critical when Talia is mortally wounded, forcing Jeremy to flee for Long Beach, Ca. Once there, Jeremy realizes that his only hope for protecting Talia is to rally Hagan's enemies against him, and fight alongside them as they aim to take down the vengeful killer once and for all.

Critic Reviews for Fire With Fire

It looks like a dozen others of its kind and hasn't a smidgeon of distinction about it anywhere, except that Willis has given up his various wigs and thus looks more like his true grizzled self.

You need to see this like we need another closeup of a hole in the head.

Violent, obnoxious and forgettable, Fire With Fire is an action shambles with some hilariously literal plotting.

So tedious that it's not even aware of its own tediousness. Richard Schiff is a minor highlight as a morally challenged defence attorney, but ultimately, can do nothing more than polish an unmentionable.

Josh Duhamel fails to set the screen ablaze as a California firefighter who becomes an unlikely vigilante avenger in this very routine action thriller, but he gets no help from a damp squib of a script.

If action B-movies are your thing then this is just about worth searching out.

The result is breathtakingly dumb with absolutely zero redeeming features.

Although it's probably the biggest movie yet to emerge from rapper 50 Cent's production outfit, this damp squib still has "straight to DVD" stamped all over it.

Your hard-earned cash deserves to be spent on something which, at the very least, attempts to engage the viewer on some level.

[Duhamel] makes a perfect fireman because he's such a charisma vacuum he could suck the oxygen out of any blaze.

David Barrett's daft, generic revenger barrels along nicely (often nastily) enough, but it must have missed going straight to DVD by a whisker.

Audience Reviews for Fire With Fire

Revenge has its own set of rules. Good Movie! The movie itself isn't anything new or amazing but it is actually pretty fast paced and keeps you interested and watching the entire time. The movie when you break it down is just another vigilante type revenge movie but again because it's so fast paced and entertaining you can't stop watching. Also Vincent D'Onofrio gives such a great performance in this that watching for just for him is almost enough to keep you till the end. Overall, this is a fast paced exciting action movie that is the perfect kind to just put in and veg out to. I liked it. After witnessing the brutal murders of a convenience store owner and his son; firefighter, Jeremy Coleman barely escapes with his life. As he is forced to testify against the crime lord, Hagan, he is placed in the witness protection program under the watch of the U.S. Marshals. As his new identity becomes compromised Jeremy is forced to take an unexpected course of action in order to get his life back and save the lives of those he loves.

Decent. Watchable. More a Josh Duhamel movie, than a Bruce Willis movie. Nothing very exciting, though, in either case....

Poorly done, nonsensical crime drama that somehow managed to attract many name actors to it.

"Not too bad. I actually enjoyed the movie. I really liked Josh in this. Bruce plays a minor role. But the story and the acting is what makes this movie work. There is good action and some comedy. Not much comedy, but enough to give some relief to the action and the story. I would see this again."