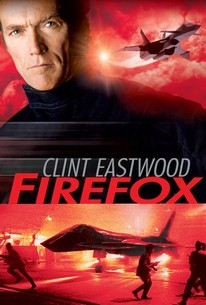 Producer/director/star Clint Eastwood takes his sweet time getting Firefox started. Eastwood plays Mitchell Gant, a past-his-prime U.S. pilot, smuggled into the Soviet Union to steal a new Russian supersonic fighting plane. Fortunately the KGB men are as burnt out as Gant, enabling him to abscond with the plane with the greatest of ease. The rest of the film is a protracted chase, pitting Gant against scores of impersonal MIG pilots. Based on a novel by Craig Thomas. ~ Hal Erickson, Rovi

Lev Mailer
as Guard at Shower

Alex Rodine
as Captain of the Riga

Director-star Clint Eastwood trots out a spy thriller of such complexity that even Five Fingers suddenly seems simplistic. But Clint is a fine storyteller and Firefox makes sense, if you pay attention.

Clint Eastwood's failure to realize his material makes Firefox more sluggish and phlegmatic than it should be.

Eastwood looks like an automated totem pole, the Russians are portrayed as the Three Stooges, and there's more drama, tension and action in a spoonful of cottage cheese than in this painfully drawn-out affair.

It feels as though Eastwood the director and producer was trying to stretch himself here, technically, and got caught up in the exercise, forgetting the movie.

Firefox is obvious and boring. [Full Review in Spanish]

The movie is gripping in a slow, sure way.

The movie is saved from the trash-bin thanks to Clint Eastwood.

Once the chases kick in and the invisible jet shows up, you'll have already withstood a healthy amount of yawns for your troubles.

So we all know Clint for his westerns, but you should also know him for his political thrillers. 'Firefox' was one of his first political thrillers in the midst of some tough cop/crime action flicks and stupid crap involving an orangutan. Naturally it was based on a novel of the same name which I've never heard of or read, so I am unable to compare the two. The plot: Put simply, Major Mitchell Gant (Clint) is a Nam veteran who can fly anything and can also speak Russian (thanks to his Russian mother). He is brought back into action on a joint Anglo-American mission to steal a highly advanced Russian jet fighter (code name Firefox) which can hit mach 6, is invisible to radar, and can fire missiles controlled by the pilots mind. He is dropped into Russia undercover. He must reach and secure the jet fighter with the help of Russian dissidents. However, the KGB are aware of his presence and are hot on his heels. Yep, its a fictional cold war thriller. The film is kinda split into two halves really, the first part follows Gant as he enters the Soviet Union, meets up with Soviet dissidents, and moves from place to place trying to stay one step ahead of the KGB. The second part follows Gant piloting the Firefox jet as he tries to evade Russian attempts to bring him down whilst trying to flee Russian airspace. For the most part the first half of the film in Russia is slow moving but with solid tension. The film wasn't actually shot in Russia due to actual American-Russian cold war unease so Austria stood in for locations. This is made abundantly clear in a shot showing Gant walking past Red Square in Moscow; its a horrendously obvious and amusing bluescreen shot. It is also kinda amusing watching Clint in this role because if anyone stood out from the crowd as a possible US spy in Moscow, it would be Gant. The man is clearly on the ropes every time he speaks to an official. He's twitchy, sweating, his eyes are darting about the place, he just looks worried as feck. Its so stupid how no Russian official ever pulls him in for further questioning. I can't deny it is quite exciting to watch Gant evade the KGB one scene after another. The sequence where Gant is trying to leave a subway station quickly before a killed guard is discovered is very good. The Russian dissidents were slightly over the top though I thought, a bit too gruff and merciless, but well acted. They also came across as too obvious for my liking, basically everyone looks so damn guilty in this film. At times it did feel like you were watching a film set in Nazi Germany, but I'm assuming its relatively accurate for the period. Seems very odd that people had to show their ID papers constantly, almost everywhere, but hey it was effective. I do think the film would have been even more effective if all Russian characters had spoken in Russian with English subs, ditto for the Americans. Although listening to Clint speak Russian did sound rather off, an understandably difficult task. I'm still not entirely sure if Gant was supposed to be talking Russian (when speaking English) when communicating with various Russian dissidents at certain points in the film. Don't think so but its possible. The second half of the movie sees Gant stealing the Firefox jet from within a Bond-esque Russian military base complete with white coat scientists who get brutally gunned down after exposing themselves as dissidents. The whole sequence isn't quite as thrilling as [i]Bond[/i] but instead quite dark and sobering. The jet itself is a very impressive full scale model which looks a bit like the Lockheed Blackbird aircraft. Whilst the air suit Gant wears is a very cool sexy and futuristic all black affair with slick helmet and visor. All the interior cockpit shots and sequences do look very authentic and of course very cool. The constant light and cloud reflections zipping off Gant's visor (along with the cockpit interior) does sell the illusion perfectly. The exterior sequences for the aircraft (and dogfight sequence) were filmed using a new technique from John Dykstra called 'reverse bluescreen'. This essentially enabled the shiny black model aircraft to appear to be flying against clear blue skies and glimmering white snow without bluescreen leakage on the model. This does work but naturally things have moved on somewhat since 1982 so by today's standards it still all looks a bit hokey. Some shots do look good, the flyby effect on land and sea is quite nice as the jet zooms overhead. The odd model shot does look pretty sweet but in all honesty a lot of it looks very fake. The more elaborate the aerial manoeuvre, the more fake looking unfortunately. All in all this is definitely a movie of two halves (have I mentioned that?). The first half is a far more serious affair of infiltration and espionage. Its dark tense and engaging despite how simplistic it all is. On the other hand the second half becomes much more of an action movie with a more jingoistic vibe. Eastwood certainly seems to feel more at home when in the cockpit of an ultra cool armoured killing machine being an all American action hero (who somehow forgets about rear firing missiles despite being the best of the best). Yes in all honesty Eastwood probably wasn't the best choice for the main role here (I know he gave himself the role). He's as wooden as a very wrinkled narrow piece of wood and is clearly outdone by his Russian dissident costar (Warren Clarke), and pretty much all of the Russian military cast. A good solid reliable Eastwood film which ironically would probably have been much better if Eastwood wasn't in the leading role. He is easily the weakest element in his own movie.

A well-crafted cold-war thriller that has wild combination of great special effects and absurdity that still makes for solid action entertainment. Not one of Eastwood`s best but still entertaining enough get your money`s worth

The first half of this movie is utterly flawless and therefore I can't say it's bad. While the last forty minutes are absolutely ridiculous, the rest is good enough to even things out. Clint Eastwood does a great job at playing a man of disguises and looks as threatening as possible, even up against classic Indiana Jones and Star Wars henchmen like Toht and Admiral Piett. There's a really great espionage story at the heart of everything, which should be remembered above the cheesy airplane scenes and psychic Russian commands.

The 1980's were not great to Clint Eastwood. For every good movie he did during the decade, there was another that was borderline horrible. You know their names: Pink Cadillac. City Heat. White Hunter, Black Heart. Holding a special place in this list of Eastwood flops from the Reagan era is Firefox, a film that's dull as hell and is the worst miscasting of Clint Eastwood's career. The film is about a mission to steal a new Russian jet called Firefox, which is able to achieve obscene speeds and runs just by the pilot thinking. That means you have to get a pilot to sneak into to Russia that is the same build, great at flying, and can speak Russian. That narrows he list down to Mitchell Gant (Clint Eastwood), a former pilot in Vietnam living with shell shock (if you don't know what that is, please look up the George Carlin bit) that fits the criteria perfectly. It's up to Gant and the Moscow underground to get him to the plane so that he can steal it for the USA. The first thing I noticed watching this film is the number of people willing to die so that Eastwood can steal this plane. It's not like it's the atomic bomb or you're going to stop mass genocide- it's a damn plane. We'll have the Japanese build one that's smaller, faster, and better. Don't sacrifice yourself. Basically, the entire movie is a cat and mouse game. The KGB are going to get him and....................oh, Eastwood escapes yet again. That's the movie. Over and over again. What should have been a MacGuffin plot in a James Bond film is now a full blown movie with Clint Eastwood as the super spy. But he isn't. It's Clint Eastwood. He isn't sneaky and able to slip through the cracks. Let's imagine Dirty Harry trying to be sneaky. Doesn't work, does it? Eastwood's legend is the guy that roars in, guns blazing with witty remarks against his dumbfounded superiors. Firefox doesn't do that and shows Eastwood in the uncomfortable state of an unstable spy behind the Iron Curtain. It's a failure for the legend. Sadly, he also directed this film too and with the special effects sequences at the end and the espionage plot throughout he fails to keep our interest. We're just bored as hell and when the big finish starts we're treating to some of the worst special effects seen in the 1980's. You have to remember that this film came out the same year as E.T. and was sandwiched between two Star Wars films and the other effects heavy films of the early '80's. Firefox's effects are laughable. This film is for Eastwood completists only! It's an artifact. It's a legend stretching himself too much into a role that in no way suits him. This film is a complete disaster. A true plane crash. (Hardy-har-har)