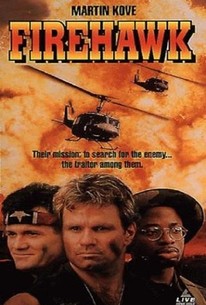 In this actioner, a band of American soldiers are on a helicopter flight over Vietnam to find a downed plane when they suddenly crash land in enemy territory. The vegetation is dense and filled with Viet Cong and the usual jungle dangers, but that is the least of their worries, because it soon becomes apparent that one of their own engineered the crash. Unfortunately, the saboteur is the only one who knows the way back to safety. This does not stop their dangerously temperamental leader, Stewart, from executing him, causing the rest of the men to question his sanity.

There are no critic reviews yet for Firehawk. Keep checking Rotten Tomatoes for updates!

There are no featured reviews for Firehawk at this time.