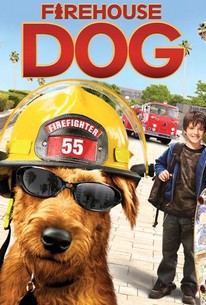 Rex, Hollywood's top-grossing canine, is known for his extreme athletic abilities and diva-like demeanor. His perks package, rivaling that of any A-list celebrity, includes Kobe beef, a poodle harem, and a diamond collar. Rex's luck--and Hollywood high life--runs out while shooting a commercial. An aerial stunt goes awry, leading Rex's handlers to presume he's dead. But Rex is merely lost--alone, filthy and unrecognizable in an unfamiliar city. Chased by animal control, he takes refuge in grubby abandoned lofts, a far cry from his former luxurious lifestyle. Shane Fahey, a bright but rebellious 12-year-old, has exasperated his father Connor for the umpteenth time. A single parent and captain of the rundown inner city fire station known as Dogpatch, Connor is charged with inspiring the sad-sack company: veteran and firehouse cook Joe Musto, the super-fit and strong-willed mother hen Pepita "Pep" Clemente (Mayte Garcia), the exhausted family-man Lionel Bradford, and the calendar-worthy rookie Terence Kahn. The team is still coping with the recent loss of their former captain, Connor's brother. Shane is also troubled by his uncle's death, and he's been acting out by ditching school.

Diavion Henningham
as Lionel's Son No. 1

Djano Henningham
as Lionel's Son No. 2

Aaron Abrams
as Policeman at Bridge

The all sub-plot story is a veritable self-help manual for tweenies-a sort of Se7en for ages seven-and-up-with greed, pride, sloth and envy bested by humility, team work and fair play.

Take the kids and have a nap in the dull bits.

It may sound like cute family entertainment, but the dog's no good - he's unappealing and looks depressed.

I myself growled and whimpered like an abused canine after a couple of hours of this sub-Lassie silliness, though the film threw me the occasional choc-drop in the form of a gag.

Todd Holland's film manipulates the prickly issues with scant regard for emotional credibility. The sentimentality is ghastly, but Rex has his moments.

Firehouse Dog is a run of the mill kids film. Adults will be fairly bored by it, and how many kids like it depends on how much they like goofy animal tricks.

A quietly moving story about a single Father and his Son. This decent film gets better as you watch it.

Breezy, silly and energetic, this canine frolic won't win top prize at Crufts, but it should offer an alternative to Pottered-out parents with young pups to please.

Firehouse Dog certainly won't be the hottest thing to hit cinemas this summer.

The dog is as cute as you'd expect, while Hutcherson gives a characteristically believable performance. Adults may not be quite as enamoured, but Firehouse Dog should keep them awake to the end

I remember this being a pretty good movie, but what I remember most about it is since I saw it, I call burps "mouth farts." LOL! Major brownie points and props for that!

I saw part of it, and it actually was not that bad.

It may not set the box office on fire, but this canine caper is more agreeable than your average underdog tale.

Points for not using "Who Let The Dogs Out?"