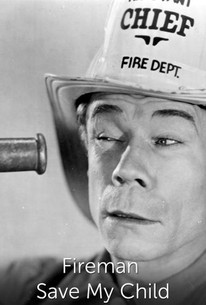 Fireman, Save My Child Photos

Joe E. Brown plays a small town fireman who is also the town's star ballplayer--and an itinerant inventor on the side. Brown is offered a pitching contract with the St. Louis Cardinals; he accepts, reasoning that the money he'll earn will help finance his invention. While in spring training, Brown becomes entangled with a seductive "good time girl" (Noel Francis), which severely compromises his game playing ability and also strains his relationship with his hometown sweetheart (Evalyn Knapp). On the day of the Cardinal's World Series clincher, Brown arrives at the doorstep of the Zenith Fire Extinguishing company, which has invited Joe to demonstrate his invention, a baseball-shaped "extinguisher bomb." A mix-up in briefcases nearly causes Brown to burn down the Zenith company, but eventually he proves the efficiency of his invention. The local fire chief then rushes Brown to the big game, where he pitches his team to victory. Though just as much a "zany inventor" comedy as a baseball yarn, Fireman Save My Child qualifies as the first of Joe E. Brown's "baseball trilogy", followed by 1933's Elmer the Great and 1935's Alibi Ike. ~ Hal Erickson, Rovi

Critic Reviews for Fireman, Save My Child

There are no critic reviews yet for Fireman, Save My Child. Keep checking Rotten Tomatoes for updates!

Audience Reviews for Fireman, Save My Child

There are no featured audience reviews yet. Click the link below to see what others say about Fireman, Save My Child!

Fireman, Save My Child Quotes