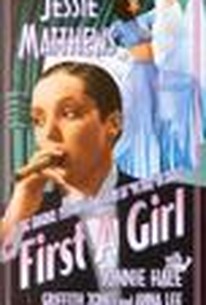 British musical star Jessie Matthews tops the bill in this song-studded comedy. Elizabeth (Matthews) is a delivery girl for a seamstress who is dispatched to drop off some costumes at a theater where a noted female impersonator is about to open a new show. The star is suddenly stricken with laryngitis, and Elizabeth is drafted to take over in his place, posing as a man who dresses like a woman. Elizabeth is a hit, and with Victor (Sonnie Hale) as her manager, she sets forth on a concert tour of Europe; she continues to perform as a man and draws packed houses and enthusiastic reviews. However, a mysterious Princess (Anna Lee) and her significant other get the strange feeling there's something odd about this new singing star, and they're determined to find out what it is. First a Girl was adapted from the German film Viktor und Viktoria, which would be remade into the American musical comedy Victor/Victoria. ~ Mark Deming, Rovi

Donald Stewart
as Singer
View All

Critic Reviews for First a girl

First a Girl is a very sumptuous production with lots of beautiful choruses, plenty of ostrich trimmings, and a big birdcage number which will probably turn Busby Berkeley green with envy.

The story is preposterous - the audience is obviously never expected to regard it as anything but a vehicle for singing, dancing, and beautiful clothes.

There are no featured reviews for First a girl at this time.