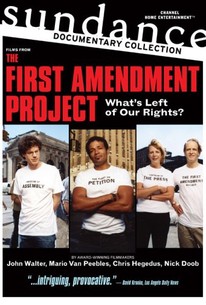 Generic title aside, The First Amendment Project isn't a boring civics lesson. Produced for the Sundance Channel and Court TV, the short-film collection is an engaging exploration of recent free speech battles (and yes, a few bad words do get spoken). The best known participants include documentary filmmaker Chris Hegedus (The War Room) and actor/director Mario Van Peebles (Baadasssss!), but all three films take a similar approach. Hegedus and Nick Doob (American High) are behind Fox vs. Franken, which looks at the suit filed against author Al Franken for using the phrase "fair and balanced" in the subtitle to his book Lies and the Lying Liars Who Tell Them. Van Peebles' Poetic License focuses on the furor over former New Jersey Poet Laureate Amira Baraka's "Who Blew Up America," while John Walter (How to Draw a Bunny), in Some Assembly Required, trains his lens on the protests surrounding 2004's Republican National Convention. --Kathleen C. Fennessy

hit and miss, but worth watching for the Franken bit alone

These films give the viewer an introduction to some First Amendment issues that may be unfamiliar to non-journalists.

There are no featured reviews for The First Amendment Project at this time.