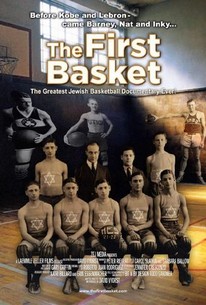 David Vyorst's documentary The First Basket takes a look at the early days of the Basketball Association of America. When it was formed in 1946, the majority of players were Jewish -- a fact that certainly is not true of American basketball just 60 years later. This film showcases how these athletes provided inspiration for Jews suffering discrimination.

Critic Reviews for The First Basket

It uncovers a fascinating and largely forgotten chapter of the game's history that is well worth revisiting.

A valuable reminder that for nearly three decades, basketball was dominated by Jewish players -- and coaches who found the sport an ideal vehicle for assimilation in the United States.

When the history of the sport is allowed to unfold through the reminiscences of geriatric Yiddish pros, pic approaches the richness of its impressive archival trove. Too often, however, director David Vyorst's chauvinistic agenda intrudes.

The First Basket, a functional (if narrowly interesting) history lesson by the filmmaker David Vyorst, recollects the rich history of Jewish participation in basketball.

Unforgiveable are the kitschy, Photoshopped graphics that maddeningly mock the defenseless interviewees from the sidelines.

Filled with terrific archival footage, The Last Basket is engrossing and fun, but tends to go on a bit too long.

Audience Reviews for The First Basket

There are no featured audience reviews yet. Click the link below to see what others say about The First Basket!