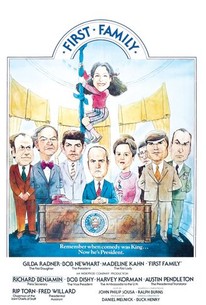 Gilda Radner, Bob Newhart, and Madeline Kahn star in this comedy. The farce sends up an idiotic First Family in the persona of a bumbling president (Newhart), his semi-alcoholic wife (Kahn), and his oversexed daughter (Radner). Satirizing the artificial, formal speech of real-life First Families in television interviews, director Buck Henry carries this mode of speech into their private lives as well. The trio travel to an African country where the First Daughter is kidnapped and white Americans are traded as slaves in exchange for some special animal dung that is able to accelerate plant growth.

What is the sound of one man not laughing?

[First Family] has sequences that are side-splittingly funny, others that are sublimely cheerful and still others that, like the movie itself, simply don't know how to end.

Buck Henry directed his own screenplay, which disintegrates about halfway through the film.

Filled with illogical situations and juvenile humor, First Family will have trouble getting anybody's vote.

There are no featured audience reviews yet. Click the link below to see what others say about First Family!