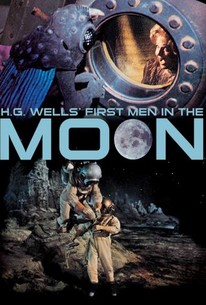 First Men in the Moon is an H.G. Welles cinemadaptation from director Nathan Juran. When scientists in the year 1964 are confused by evidence of a long-ago space flight, nonagenarian Arnold Bedford (Edward Judd) explains all. Back in 1899, Bedford, eccentric scientist Joseph Cavor (Lionel Jeffries) and heroine Kate Callender (Martha Hyer) took a trip to the moon in a home-made space vehicle. Once on the lunar surface, they encountered an alien civilization resembling an ant colony, complete with "queen," soldiers and workers. How they returned, and the aftereffects of their journey, comprise the film's final third. Peter Finch appears briefly as a messenger; he happened to be visiting the set when the actor hired to play the bailiff's assistant failed to show up.

Huw Thomas
as Announcer
View All

Critic Reviews for H.G. Wells' First Men in the Moon

Definitely unusual for a sci-fi project, the moon walkers' space suits don't have gloves, leaving their hands exposed to the harsh atmosphere.

The incessant comic relief, clumsy and cumbersome, too often gets in the way of a cracking good tale.

Despite its flaws, FIRST MEN IN THE MOON remains a charming entertainment that stirs our Sense of Wonder with its fantastic imagery...

Never mind how Cavorite works or whether jumping about on the moon (with wires visible) wearing only a diving suit and no gloves is really a good idea.... [It] remains a delightful B-movie charmer ... that's still endearing and entertaining.

One of the most completely satisfying of all sci-fi films.

Audience Reviews for H.G. Wells' First Men in the Moon

Or in this case the first men, and one woman, in the moon. Bit of a glaring mistake with this adaptation. Why did they alter the source material? I guess director Nathan H. Juran thought his film needed a beautiful damsel in distress angle for the wider audience. The second H.G. Wells story to feature encounters with alien lifeforms after his most famous sci-fi story The War of the Worlds. Obviously a more fantastical story from Wells and this British made film certainly has that outlandish angle that's for sure. Although it seems this film isn't as surreal or fantastical as the original story surprisingly. The whole story is narrated by the main character as an old man. It tells the story of how his eccentric inventor neighbour creates a substance that defies or eliminates gravity thus allowing them to fly to the moon in a homemade space sphere (hexagon). There on the moon they encounter insect-like aliens hungry for knowledge. Interesting to note that this film was of course made before man actually reached the lunar surface (1969). This of course doesn't mean people in 64 thought there were aliens running around up there, but back when the original story was published in 1901 I'm guessing people could of thought it possible. The whole idea that the two main characters in this film use deep sea diving gear on the lunar surface is cute. Whether or not this was an actual belief of the era or just Well's fantasy, I don't know (I'm not even sure if this is accurate with the original source material). I think its fair to say back in the early 1900's the knowledge on resources/materials required for space travel/space crafts in general was probably very limited and underestimated, so what we see in this adaptation could well have been real concepts of the time (maybe not the moon bugs though). Putting aside the real science plot holes (of which there are absolutely tonnes), the film itself is highly enjoyable. This is my first ever viewing of the film and straight away you can see many little sequences which have been homaged by other sci-fi films, mainly 'Mars Attacks'. It seems Mr Burton liked this particular sci-fi film. The big bug idea could also have spawned the likes of 'Starship Troopers', mainly the huge centipede-like insects (space cows) that roam the lunar surface. The alien creatures known as Selenites are bug-like in appearance, bipedal and live underground like ants. These guys are mainly men in rather cheap basic looking rubber suits but some of the main aliens are animated by Ray Harryhausen including the wonderful lunar centipedes. Visually the whole film is very striking offering some lovely matte paintings, sets, models, and that typically dapper Victorian attire that you see in many Wells and Verne adaptations. Even the inside of the space sphere is lined with that diamond shaped patterned leather upholstery effect. I think that concept was started by the 1960 film 'The Time Machine'. The small space flight sequences at the start of the film are a joy to behold, very dated but very effective (not too far from reality either with the flight suits); surely everyone will appreciate them. The only downside to the film for me was the bland characters. Bedford (Edward Judd) has that stereotypical male chauvinistic streak about him coming across as rather unfriendly and rude. He's always shouting at his fiance Kate who does pretty much nothing accept look pretty and shout back. Then you have the main character of Cavor played quite oddly by Lionel Jeffries. His performance was a strange one as it comes across as though he's improvising, it doesn't feel like he's in character or simply he can't act too well. His constant yelling and rather frantic red-faced performance does become tiresome. At the time this film was made, space travel and reaching the moon (the space race) was at its peak with public interest. So to go backwards and make a film so 'medieval' must have been a hard sell, despite being an adaptation. But this film is pure and utter silly fantasy (no further explanations required for that); its not a film for actors and its not really about the characters either. Its a visual spectacle, an effects film, an early 60's blockbuster if you will. Take all the gigantic scientific plot holes and complete lack of realism as part of the fun (as was intended), and you can't fail not to enjoy.

Good special effects for the period and some amusing scenes at the beginning but the film is widely uneven.

a promising start with an eccentric british inventor creating an anti-gravity paste that allows him to travel to the moon in 1899. once there it gets pretty silly. i was disappointed with harryhausen's effects in this one