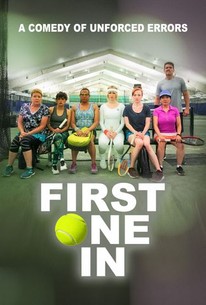 First One In Photos

After accidentally killing an endangered animal on a popular reality TV show, Madi Cooke (Kat Foster) is labeled an eco-terrorist, is fired from her job, and believes she now is the most hated woman in America. She changes her look and last name to interview with Bobbi (Georgia King), who heads Mason Agents -- the #1 real estate firm in Connecticut. But in an effort to maintain championship status in a local, annual tournament, Bobbi only hires women who play tennis. Madi joins a clinic at Acme Indoor Tennis to practice the game she hasn't played seriously since high school, nearly 20 years ago. That's where she meets Tennis Pro Fernando (Josh Segarra), Jane (Catherine Curtin), Ceecee (Emy Coligado), Preeti (Aneesh Sheth) and Valentina (Karina Arroyave), and renews her strained friendship with her best friend and former high school tennis partner, Ollie (Alana O'Brien). In a twist of events, Madi and her underdogs take on Bobbi's Mason Agents at their Elite tennis club, where Madi will find her grit or lose everything.

Critic Reviews for First One In

First One In is a nonstop camp-fest with an underlying message of female friendship, whose humor is sure to be particularly appreciated by fans of the sport.

'First One In' contains dry humour, relatable characters, and a very excellent ensemble cast... Come for the laughter, stay for the competition, camaraderie, and friendship.

An over-the-top and incredibly fun film as it exemplifies women's relationships, our competitiveness, and the importance of friendship all within the sport of tennis.

First One In is so gosh darn endearing you can't help but feel at least a little bit better after watching it than you did before.

I loved every minute of the chaos and turmoil which doesn't take itself seriously, yet finds a way to pull at your heartstrings and remind us to lift one another.

A laugh out out loud funny movie filled with great characters. The jokes keep on flying which may annoy some, but the laughs and heart are there.

The poorly delivered humor leaves a lot to be desired. However, from a technical standpoint, the movie is beautifully made and hits the nail on the head.

There are no featured reviews for First One In at this time.

First One In Quotes