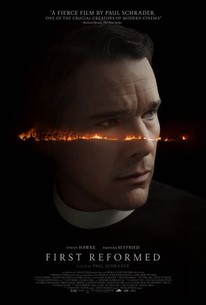 Critics Consensus: Brought to life by delicate work from writer-director Paul Schrader and elevated by a standout performance by Ethan Hawke, First Reformed takes a sensitive and suspenseful look at weighty themes.

Critics Consensus: Brought to life by delicate work from writer-director Paul Schrader and elevated by a standout performance by Ethan Hawke, First Reformed takes a sensitive and suspenseful look at weighty themes.

Critic Consensus: Brought to life by delicate work from writer-director Paul Schrader and elevated by a standout performance by Ethan Hawke, First Reformed takes a sensitive and suspenseful look at weighty themes.

Reverend Ernst Toller (Ethan Hawke) is a solitary, middle-aged parish pastor at a small Dutch Reform church in upstate New York on the cusp of celebrating its 250th anniversary. Once a stop on the Underground Railroad, the church is now a tourist attraction catering to a dwindling congregation, eclipsed by its nearby parent church, Abundant Life, with its state-of-the-art facilities and 5,000-strong flock. When a pregnant parishioner (Amanda Seyfried) asks Reverend Toller to counsel her husband, a radical environmentalist, the clergyman finds himself plunged into his own tormented past, and equally despairing future, until he finds redemption in an act of grandiose violence. From writer-director Paul Schrader (Taxi Driver; American Gigolo; Affliction) comes a gripping thriller about a crisis of faith that is at once personal, political, and planetary.

First Reformed is a bleak, punishing movie and the furthest thing imaginable from an easy crowdpleaser. But Hawke juices it with an austere sense of grace.

The film is a cry of rage against the polluters and corrupters who, Schrader contends, are destroying the planet, as well as against the commercialisation of the churches and the growth of terrorism.

They are weird moments of almost hypnotic transcendence, but at the center of it is that tortured God's lonely man character perfectly embodied by Ethan Hawke.

A work that most 30 year old's would welcome, and one that a 71 year old might have thought would never come around again.

You won't see a more textured film this summer.

Schrader is the divine mortal who wrote Taxi Driver and Raging Bull. He's as passionate as ever; what he has lost is his discipline.

Pass the holy water. This one gets spiritual.

The Taxi Driver and Raging Bull scribe isn't just here to settle scores. Instead, his view of faith - and what exactly faith calls for - qualifies as rigorous religious cinema, not just as a critique of the institution.

Swept me like high tide, in the end, much as a windfall of good luck can disorient us when we are deep in mourning. This painful, beautiful, essential meditation on isolation.

With challenging, rather than entertaining topics, the movie stands out...

There are no easy answers or conclusions in First Reformed, but it's the acknowledgment of the struggle and the beauty that can still be found amongst a spreading taint that makes the film resonant.

Uncluttered and edited with laser like attention to detail, this is a thought-provoking movie that bears repeated viewing.

Slow and calm drama in 4:3 aspect ratio (which fits the mood perfectly) and almost entirely static camera work, relying mostly on its writing and the great acting. The tension builds up slowly, without reading about the premise you wonder for a while where the film might actually take you. In the end it has you by the collar and doesn't stop shaking. There are several themes and ideas coming together here, but for me what stands out is the big bitch slap for Christian conservatives in the US backing the wrong orange faced horses these days.

I don't believe I've ever seen a film shot so deliberately. Almost every single angle is framed with precision and intent. Like a Wes Anderson film sapped of any and all whimsy. Many shots linger in a style not often found outside of horror films, in the scenes they intend to deliver the audience a scare that its characters do not see.

With a formal rigor that reflects the protagonist's internal struggle and the austere life he chose to lead, Schrader's film reminded me of Ingmar Bergman's Winter Light, in which a Christian priest also had his faith shaken by despair - a despair so intense we can feel it across the screen.