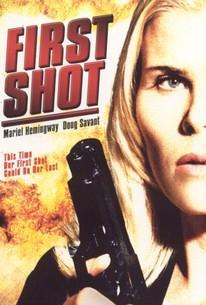 First Shot is the third in a series of cable TV movies focusing on fearless female Secret Service agent Alex McGregor (Mariel Hemingway), following First Daughter and First Target. Newly promoted to head of Secret Service in Washington, Alex is determined to safeguard the President (Gregory Harrison) from a militia rebel group that has already killed 40 soldiers in a domestic terrorist attack. But until her husband, Grant (Doug Savant), is kidnapped, Alex is unaware that she, too, is on the terrorists' "hit list" -- and that she is already in the cross-hairs of a fanatical sharpshooter (Dean Wray). First Shot debuted August 11, 2002, on the TBS Superstation.

The same old militia is back again, this time kidnapping Mariel's husband, and it also bombs the officer's club at an Army base, and quite a lot of clap is trapped.

There are no featured reviews for First Shot at this time.