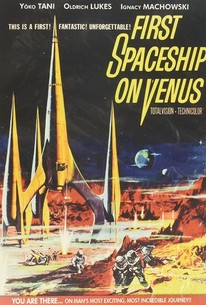 Originally released in East Germany as Der Schweigende Stern ("The Silent Star") and in Poland as Milczaca gwiazda, First Spaceship on Venus was partially intended as an anti-nuclear tract. In 1985, a strange, extraterrestrial spool is discovered, leading to a manned expedition to Venus. The multinational crew includes American Brinkman (Gunther Simon), African Talua (Juliusz Ongewe), and Japanese Sumiko Ogimura (Yoko Tani). After several special-effects setpieces (and reams of dogmatic dialogue later), the crew lands on Venus, only to discover that the planet's population was wiped out by a nuclear error. Armed with this knowledge, the expedition returns to earth with a warning for all mankind. The film was based on a novel by noted Eastern Bloc sci-fi novelist Stanislaw Lem.

Non-sensical dub-fest in which a bunch of dry international dolts head out to Venus -- slowly.

Among DEFA's minor treasures, and with a Dr. Strangelove character as Henry Gibson might have played him.

This movie is stupid and boring. I didn't like it, and I can't even remember what happened in it. I don't recommend seeing it.