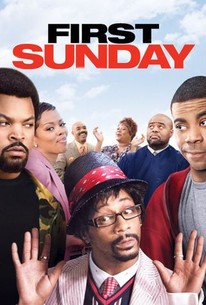 Critics Consensus: First Sunday may have its heart in the right place, but its funny bone is dislocated.

Critics Consensus: First Sunday may have its heart in the right place, but its funny bone is dislocated.

Critic Consensus: First Sunday may have its heart in the right place, but its funny bone is dislocated.

Gospel-minded playwright David E. Talbert produces, writes, and directs this urban crime comedy concerning a pair of criminals who take a group of church parishioners hostage while attempting to rob the holy house, only to find their captives slowly convincing them to repent and give up their lawless lifestyles. Durell (Ice Cube) and LeeJohn (Tracy Morgan) are two best friends with a special knack for petty crime. Upset at discovering that his ex-girlfriend is planning to move out of state with the couple's young son, Durell knows that the only way to keep his fractured family in close proximity to one another is to raise the 17,000 dollars needed to pay off her growing debt. In order to get the money before his ex decides to make the big move, the desperate Durell enlists the aid of his scheming best buddy to rob their neighborhood church. But someone has beaten Durell and LeeJohn to the punch, and if they ever hope to get their hands on that quick cash, this bumbling pair will first have to spend an entire night in the presence of not just the almighty lord, but some of his most fervent followers as well. Katt Williams, Keith David, Regina Hall, and Chi Mcbride co-star. ~ Jason Buchanan, Rovi

The missing-church-funds subplot will be easily figured out by any four year old, but it winds up being a McGuffin anyway.

With his movie debut, Talbert plays to his established audience, the redemption message riding roughshod over everything, even such trifling concerns as character consistency and continuity.

The least funny man ever to make a career in comedy movies, Ice Cube hauls his sullen mug back in front of the cameras for the execrable First Sunday.

Loretta Devine and Olivia Cole shine out as veteran members of the flock, but even their class combined is no saving grace.

Grafting moral uplift on to a slapstick caper with mixed results, this nevertheless captures some of the giddy eccentricity of the Ealing comedies it haphazardly resembles.

Ice Cube is now Public Enemy Number Fun, although First Sunday is only fun if you're in dire need of a modernist urban take on the strain of comedy Abbott and Costello used to practice, which, let's be honest, wasn't that funny to begin with.

The ending seems either a catering to studio influence or an effort to keep the film at a certain length as it falls short of Talbert's usual standard of writing.

First Sunday isn't an out and out bad film, but to be a good one it would need to either greatly raise the dramatic steaks, or push its comedic boundaries over the top in conception. Instead it treads water safely in the middle, and it shows.

Perhaps moviegoers demand simplicity and cheap laughs more than ever during tough times, but this must be discouraging to aspiring African-American comedians and writers.

This movie fails as a comedy, a drama, a morality play, and as a coherent motion picture. Awful stuff!

If it was not for Morgan's goofy character or Katt Williams, I would be giving this movie a zero.

Devilish satire outing felons who come in gaudy three piece suits too, a sweltering church 'hotter than Satan's toenails' and Sunday sermon sidebars that all the rest makes go down easy.

OMG! Movies need more meaning. WHO MAKES A MOVIE ABOUT STEALING FROM A CHURCH.

A black morality tale... a nice twist from Cube's previous film outings. The comedy is still there, but throw in religion, guilt and the ghetto and you in for a good night. If you like these kinds flicks. Watch and praise the Lord that you arent as stupid as the two crims in this one!! XD!!

Didn't really hit the target being a comedy, Katt Williams could have had more lines with his funny character.