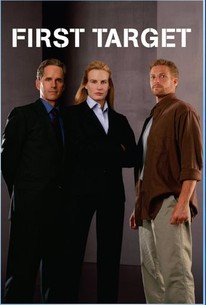 In the made-for-TV First Target, Daryl Hannah stars as feisty and combative U.S. Secret Service agent Alex McGregor, a role created by Mariel Hemingway in the earlier TV movie First Daughter. This time around, Alex finds herself attempting to prevent the assassination of the President of the United States in a "wide open" Washington State national park. Offering assistance every step of the way is Alex's fiancé, Grant Carlson (Doug Savant), who might otherwise be neglected altogether by the understandably preoccupied heroine. Boasting gorgeous scenery (it was filmed in British Columbia) and a particularly cunning villain, First Target was originally telecast over TBS on October 15, 2000.

There are no critic reviews yet for First Target. Keep checking Rotten Tomatoes for updates!

There are no featured audience reviews yet. Click the link below to see what others say about First Target!